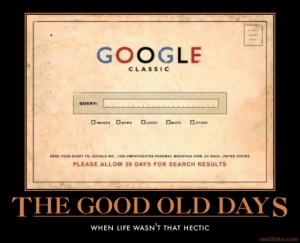 I’ve always been fascinated by those birthday cards that offer a little personalized nostalgia for yesteryear to our elderly loved ones who are able to tell us stories about “back in the day when…”  I’m talking specifically about the cards that you typically see in gas stations and Cracker Barrels, the ones that try to give a societal snapshot from the day someone was born.  They remind my father (born in 1942), for example, that the hit single on the day of his birth was Bing Crosby’s “White Christmas” (it had recently overtaken “[I’ve Got a Gal in] Kalamazoo”) and that gas back then cost only 19 cents a gallon.  For that matter, the 19-cent gas would have fueled a new car that someone could buy for just over a thousand bucks.  And so on.

Every time, it was always the same: when extended relatives insisted on getting some Southern eats on highway stops between our respective cities, I made my way through the porcelain chicken cookie jars and decorative aprons and started reading these cards, eager to see how the world looked on some random day in 1954.

I wish I could say I was filing through them with a big sense of irony, rolling my eyes at how silly it is to think that any snapshot says something about anything other than the person taking the proverbial picture.  Because pssssh…I’m a savvy theorist, after all!  I eat hokey additions to the nostalgia market for breakfast!  Well, not really…it was an Uncle Herschel’s special.  And I wasn’t actually reading those cards ironically.

Cut to: I’m in my car on the way to campus one morning a couple years back, listening to Alabama Public Radio.  Suddenly I hear the dulcet, lip-smacking voice of Kathryn Tucker Windham, local celebrity of sorts who made a name for herself as she went from small-town journalist to Alabamian storyteller.  She had a series for some time on APR, offering weekly “stories” (later called “commentaries,” presumably when the production team caught wind of no narrative arc) every Friday morning.  I enjoyed listening to her—something about the sing-songy cadence to her distractable musings.  Inevitably, the soft punch line of every story was always something to the effect of things just not being the way they used to be.  Her memories shared her hankering for the “good old days” when life was made of “simpler times.”

No wonder she was so popular, right?  Folks could wistfully meander down memory lane with her, or, in the case of we non Alabamian natives—we academic emigrants of other locales— could congratulate ourselves on our appreciation of a quaint folk scene and fancy ourselves imbedded in a charming brand of Southern culture (while, of course, reserving the right to distance ourselves from the same at academic conferences).

Of course, with the praise of how things were done “back in the day,” comes a critique of contemporary society—in the instance of the bit above, a disdain for what she sees as the pseudo-communication of emailing, a lack of conversations in general in this digital age, and thus the fear of extinction of what she calls colorful expressions.

Yep, nostalgia sells.  And despite all my disclaimers, I don’t mind admitting I’m an occasional customer.  What’s important to…hey, remember!…is that a look backward in time, while pleasant to do among nears and dears, does not preserve some pristine portrait of the way things were any more than do those Cracker Barrel cards.  Students in my seminar on Religion in the American South talk about this vis-à-vis Scarlett O’Hara and the way that figurines of the character are still sold for lots of money as collectibles to people interested in antiques.  There is no Scarlett O’Hara, after all—not with her dresses and classic 17-inch waist—without Mammy standing behind her tying her laces.  What we collect is not Scarlett O’Hara herself but rather a product of a specific moment in time, made possible by a complex web of domestic servitude, ideas about Southern femininity, and plantation societies. 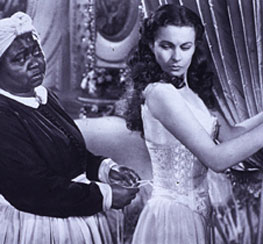 How much “simpler” a certain time was depends, then, on who’s talking, on the person for whom it was simpler.  Andy Griffith’s Mayberry might have been a simple place of good biscuits and sapling fishing poles for its inhabitants, but between Jim Crow and gender discrimination (just as two quick examples), there are plenty of people for whom the 60s were not what one might call the good old days.

The Daily Show gets at this idea with John Oliver’s quest for a simpler time in history:

Anxieties over whether small-town culture or a certain way of life has been “lost” presume that there was an actual thing to lose in the first place.  Gotta admit: seems like there’d be something simpler to just admitting that simplicity is a thing of our own making.