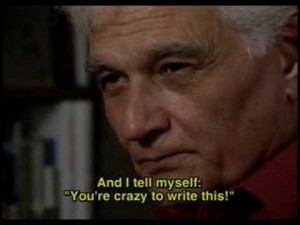 “An Interview with Jacques Derrida” by Nikhil Padgaonkar

N.P.: Over the years, you have repeatedly defended the view that deconstruction is not an inherently negative term, that it is not to be understood as criticism or destruction. And indeed in an interview you gave in 1982 and which was subsequently published in Le Monde, you even said that deconstruction is always accompanied by love. Could you comment on this “love”. Is it the same love as in “philia”?

J.D.: This love means an affirmative desire towards the Other – to respect the Other, to pay attention to the Other, not to destroy the otherness of the Other – and this is the preliminary affirmation, even if afterwards because of this love, you ask questions. There is some negativity in deconstruction. I wouldn’t deny this. You have to criticise, to ask questions, to challenge and sometimes to oppose. What I have said is that in the final instance, deconstruction is not negative although negativity is no doubt at work. Now, in order to criticise, to negate, to deny, you have first to say “yes”. When you address the Other, even if it is to oppose the Other, you make a sort of promise – that is, to address the Other as Other, not to reduce the otherness of the Other, and to take into account the singularity of the Other. That’s an irreducible affirmation, its the original ethics if you want. So from that point of view, there is an ethics of deconstruction. Not in the usual sense, but there is an affirmation. You know, I often use a quote from Rosensweig or even from Levinas which says that the “yes” is not a word like others, that even if you do not pronounce the word, there is a “yes” implicit in every language, even if you multiply the “no”, there is a “yes”. And this is even the case with Heidegger. You know Heidegger, for a long time, for years and years kept saying that thinking started with questioning, that questioning (fragen) is the dignity of thinking. And then one day, without contradicting this statement, he said “yes, but there is something even more originary than questioning, than this piety of thinking,” and it is what he called zusage which means to acquiesce, to accept, to say “yes”, to affirm. So this zusage is not only prior to questioning, but it is supposed by any questioning. To ask a question, you must first tell the Other that I am speaking to you. Even to oppose or challenge the Other, you must say “at least I speak to you”, “I say yes to our being in common together”. So this is what I meant by love, this reaffirmation of the affirmation.

One Reply to “The Love in Deconstruction”