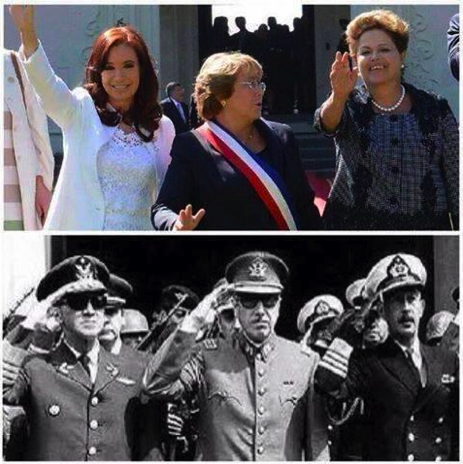 It speaks for itself. Right?

I’m not so sure it does — not without a fair bit of help from a viewer.

For I’m not sure why the two photos are juxtaposed — unless, of course, you come to them with a specific set of assumptions about essential gender differences (“Why, if women ran this world…”). Armed with them, then the picture screams significance, I guess, for now there’s a difference that’s worth noticing.

But, while not wishing to suggest that the governing style of anyone in the top photo is comparable to, say, Augusto Pinochet (center bottom, dictator of Chile from 1973-1990) in terms of using violence to advance his political agenda, I do wish to point out that the leader of any modern nation-state — democratically elected or not, man or woman, wearing a uniform or not — not only has considerable control over the means of violence to promote what they can persuade others is in the “national interest” (e.g., although he doesn’t wear a uniform, the U.S. President Obama is “Commander in Chief,” as they phrase it), but has likely also made so many compromises and deals to other powerful interests in order to reach such a position of political influence that s/he hardly represents some idyllic notion of innocence or justice or equality.

So it seems to me that you have to overlook some possibly unpalatable similarities and perpetuate some troublesome notions of gender identity — notions that many women have been fighting to overcome for a long time, no? — in order to “see” a difference so obvious that all you need is to put the two pictures beside each other to produce an effect.

5 Replies to “A Woman’s Touch”