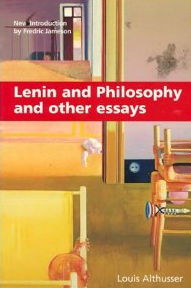 Louis Althusser’s (d. 1990) essay collection, Lenin and Philosophy and Other Essays (1968; English translation 1971), in particular the essay entitled “Ideology and Ideological State Apparatuses (Notes Towards an Investigation),” is crucial for anyone interested in rethinking the common perception of identity-as-expressed-quality as instead being the interiorized result of prior and assorted (i.e., among actors of varying authority) social acts of identification and interaction (as briefly suggested in this post). As Althusser wrote in that essay:

I shall then suggest that ideology ‘acts’ or ‘functions’ in such a way that it ‘recruits’ subjects among the individuals (it recruits them all), or ‘transforms’ the individuals into subjects (it transforms them all) by that very precise operation which I have called interpellation or hailing, and which can be imagined along the lines of the most commonplace everyday police (or other) hailing: ‘Hey, you there!’