There’s not too many details in the public domain yet (at least when I wrote this post), but we know that a middle-aged, white male suspect was apprehended after a stand-off with police (pictured above), that three people (including a cop) were killed, and that several more wounded.

— which makes this episode easily linked to ongoing criticisms across the US of Planned Parenthood‘s efforts to provide reproductive health services to women. For, as Colorado Spring’s mayor, John Suthers, was quoted as saying:

But there’s more: the fact that the man arrested was white and is accused of committing such a violent crime is also something that easily attracts some people’s attention these days, what with the number of African American males who are annually killed by police for doing far less than this. For the fact that he was taken alive, allowed to surrender, is itself cited as but one more instance of white privilege. (Compare it to how Laquan McDonald was treated by police in Chicago, back in October of 2014, for example.)

And for yet others, it’s tough not to think about the manner in which so-called mainstream members of American (assumed to be Christian) society seem not to feel a compulsion to disavow this act of violence, what with the way that a crime perpetrated by someone who seems Muslim is now an occasion for the media to call on all Muslims to condemn the act. In fact, a quick search online will actually find people supporting his alleged actions, as if anyone in that clinic deserved what they got. 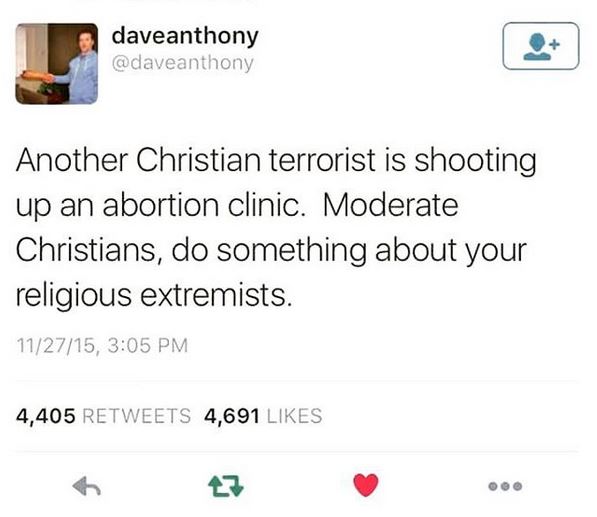 What’s more, the fact that we don’t yet know many details of the accused shooter’s motives is itself a curious thing (much like the care with which the authorities are now treating the San Bernadino shooting), for whenever we believe a crime is committed by someone unlike us we rather quickly decide on a narrative to account for their acts (whether or not that narrative holds water once the details are actually disclosed) — thus the ease of how we sometimes use that designator “terrorist”; yet, in this case, the media keeps reporting (as phrased by CNN the other day):

Law enforcement officials caution it’s too early to determine a motive in the case until all evidence is gathered and examined. That process is still ongoing.

Slow and steady wins the race when the accused is judged to be like us — for then we introduce all manner of nuance to accomplish two things: (1) account for the crime in a way that isolates it to the perpetrator (the old “one bad apple” mode of explanation) and thereby (2) distance ourselves from it. But when the crime is committed by those judged unlike us, those we fear or despise, well, we predictably do the opposite, of course, for then we account for the crime by appealing to broad generalities about others that portray “them” as homogeneously uniform and thereby lacking the fine-grained distinctions we routinely afford to ourselves.

Only “we” have innumerably nuanced shades of grey.

For anyone interested in comparison — its motives, how to carry it out, and the practical effects of doing it in different ways — the way that not just the police and media respond to such events, but also the way that we ourselves narrativize them, are all instructive examples that deserve study. For these moments afford us a glimpse into how that continuum whose opposite ends are known as affinity and estrangement (to hearken back to terms Bruce Lincoln used in what is arguably his most influential book) is self-beneficially manged by people, thereby revealing how the value of sameness is either extended to or withheld from people around us.

Update: That the San Bernardino suspects now turn out to be a man who worked at the facility named Syed Farook and a woman (seemingly his partner) named Tashfeen Malik means that we are afforded yet another tragic moment to study how quickly terms such as terrorism and presumption of a religiously-inspired motive are or are not invoked by media.

One Reply to “Innumerable Shades of Grey”