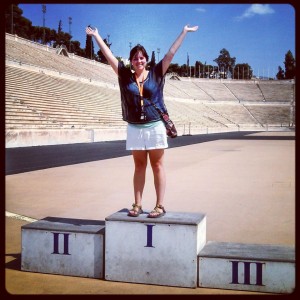 A quick post in honor of our site’s Curator, who is currently seeing the sites/sights in Greece with Vaia, a member of Culture on the Edge: above is Andie on the victor’s podium at the white marble Panathenaic Stadium — (re)built for the first modern Olympic games, in 1896, on the remains of an 4th century BCE stadium that hosted what we consider to be the ancient games.

Notice anything wrong with the picture?

In the quest for modern legitimacy based on some object’s or action’s presumed antiquity one has to be careful not to be too accurate in your reproduction of the past, since it is a distant, foreign land and matching it too closely may make something so strange as to appear dangerous, illegitimate, or even uninterpretable. So we have to tweak our representation of it, of course, (re)making it in our own image, narrativizing it so that it makes sense to us and suits our purposes, and doing so in a way that prompts one not to see the inevitable gaps and contradictions that make evident that our reproduction is, in fact, a production. After all, were the bathrooms at that modern stadium comparable to the ancient stadium’s (if it had any!) — thereby imposing a very different, ancient sense of privacy onto our modern sense — then we’d likely think that it was just a little too authentic.

So the Roman numerals on a podium at a stadium built to reproduce a sense of ancient Greece, which actually employed an alphabetic numbering system, is quite curious, no? But what’s even more curious is that most people’s eyes likely don’t even see the anachronism, since Roman numerals “look” old enough — to us.

(By the way, that the first victor’s podium [PDF] was used only as recently as the 1930 British Empire Games in Hamilton, Ontario, and then copied at the Los Angeles Olympics in 1932, makes this story all the richer, of course.)

One Reply to “I’ve Got Your Number”