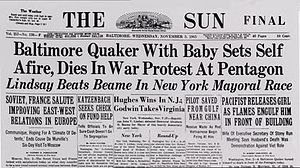 The other day a Facebook friend posted a link on my wall from http://www.aljazeera.com concerning a self-immolation that recently took place in Washington DC.

Have you read it?

What my friend — we’ll call him “Chip” — thought I would find interesting was that here was a piece of journalism on people publicly setting themselves on fire that did not make mention of religion. And he was right — this is interesting.

Self-immolation is a topic I’ve written on before: the manner in which supposedly other-worldly motives and deep meanings often attend commentaries on this (admittedly extreme or, at the very least, uncommon) form of human behavior; lighting yourself on fire seems to defy rationality, or so scholars and journalists alike seem to conclude, so it must have something to do with…, wait for it: religion. The newspaper headline above, concerning Norman Morrison’s death outside the U.S. Pentagon in 1965, says as much; “Baltimore Quaker” is the key descriptor in the headline, one chosen presumably to shed a certain light on the act (i.e., “Well, if a pacifist did that then he must be riled.”). After all, it didn’t start out with, “Man from Erie, PA….”

But instead of seeking understanding of such acts in ancient Buddhist texts or instead of drawing on some specialized literature on sacrifice, the article from aljazeera.com concludes:

That many of the people recently doing this are unemployed (though more information about this man is only now coming out) is a similarity that stands out for this author, suggesting to her that this mundane (but not insignificant) economic status will somehow help us to understand this act.

All of which ought to make us curious as to the usually unnoticed conditions that tell us when to, or not to, invoke this thing called religion as part of our explanations of human action. For when we do or do not call upon such things as religiosity, faith, or spirituality (e.g.,, She did that because she is religious or They did that because they are religious…) may tell us far more about how we organize and perceive the world (and how puzzled by it we sometimes are) than it tells us about the actual workings of the world itself.

And so, with all this in mind, and by way of a conclusion that concludes nothing in particular, what do you make of the following 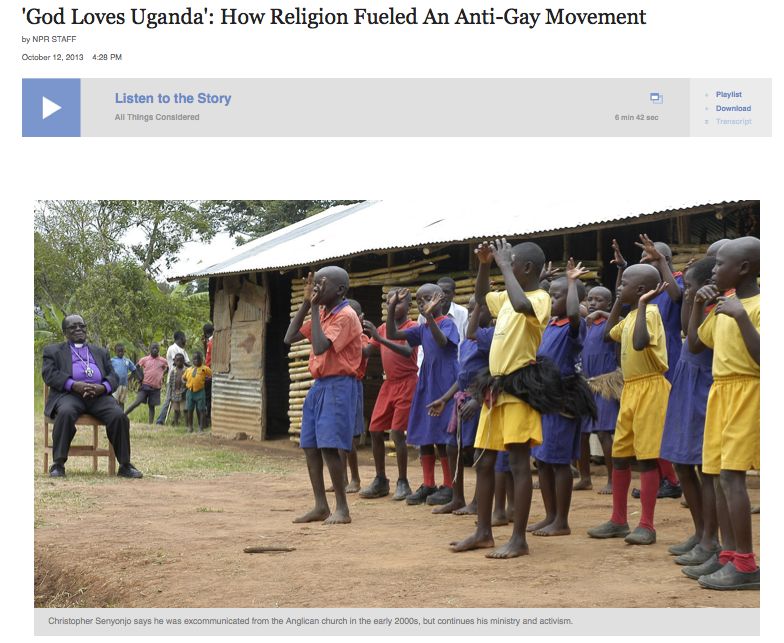