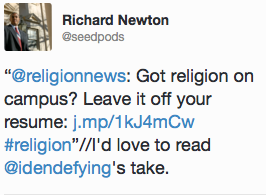 If you didn’t catch the article @seedpods mentions, it opens as follows (click the image to read it all): 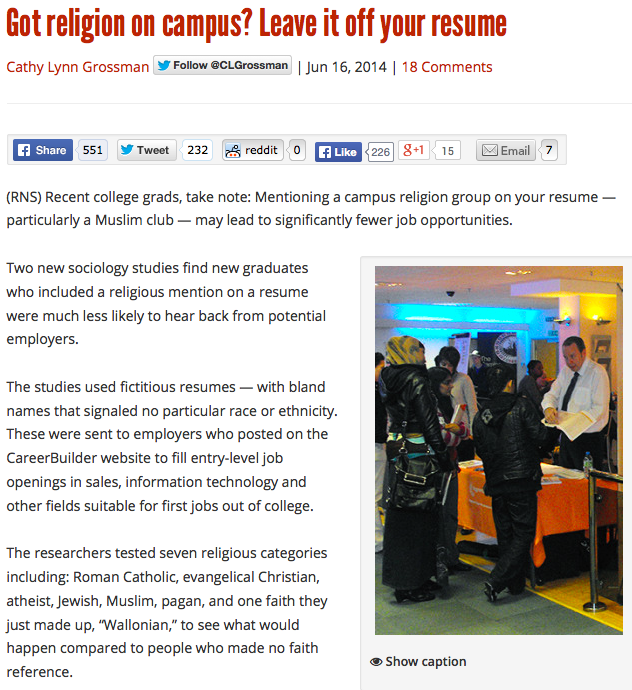 And the abstract to the actual journal article itself reads: 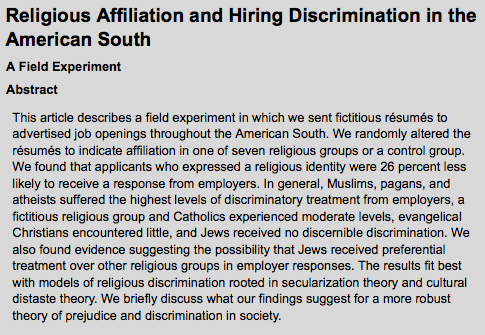 There’s so many things to comment on here, from the difficulty in social analysis of drawing definitive conclusions concerning causality to the typical notion (even among scholars) that identity is something inside that is expressed outward. Perhaps one could tackle the way longstanding stereotypes get casually reproduced, such as when the researchers offer the following curiously generalizing aside (on p. 203 of the actual article, which is posted free at the journal’s site):

Religious stratification theory accurately predicts that Jews, who are highly educated and have higher incomes, would experience the least discrimination…

Maybe we should tackle just how one measures this thing called religiosity (attendance at services? carrying lucky charms?), so as to draw the following conclusion (p. 204):

This suggests, ironically, that religious discrimination in hiring is most prevalent in regions of the country where religion is most passionately practiced.

What about exploring the researcher’s understanding of the work done by the category religion, for only if you think it names a serene realm of ethereal goodwill would the above conclusion (about the supposedly more religious US south discriminating more than the less religious northeast, which they had studied earlier) be ironic. If, instead, that which we name as religion is more like a kin-based form of identity politics, then the above finding isn’t ironic at all.

Or maybe we could mull over the the conclusion the study reached (click for another summary story on the research):

I could have saved them considerable time if they’d just asked me before doing all the research. But perhaps the problem is all those sensational headlines on the web that made much of this study, like The Washington Post‘s:

For if we grant the researcher’s assumptions, they found that listing evangelical Christian affiliations didn’t hurt or hamper response rates from prospective employers — but maybe this isn’t news?

My point?  After just a quick look it is apparent that such research raises far more questions than it answers, for it is not like it uses transparent terms to describe factual states of affairs and social self-evidencies — as such research seems to presume, of course, as do most of those who read either it or who read web articles on it.

So, while I’m not sure what other members of our group think of this study, it strikes me as not telling us all that much — other than how the researchers themselves understand social life to be organized and how they operationalize that conception.