Most recently, give a listen to this NPR radio story from this morning, in particular the 3:34 point onward, citing the Senate Intelligence Committee report that was just released (from which the above image comes [see p. 38 of the report]).

What is pretty interesting is the realist assumptions that drive this way of framing the events; for no one seems interested in how the opinions of the voters who cast those votes were shaped or created in the first place, seemingly assuming some sort of pristine voters who are impervious to influence prior to stepping into the booth. Instead, it’s the sanctity of the ballot box that preoccupies everyone — as if that’s the only way to infleunce a supposedly free and fair election.

Out of concern for the sensibilities of some readers I won’t even go down the road of citing how effective propaganda has been, in the past; instead, consider the well-known fact that spending on advertising is a good investment for businesses — advertising that, though once all about telling potential consumers how minty your cigarettes are as compared to the leading menthol competitor, are now, instead, all about creating an ideological atmosphere in which this perfume stands out as the logical choice over that one.

In fact, if your ads are successful, shoppers won’t even consciously choose your perfume because it’ll be the only one that they find legitimate or desirable to buy.

For example, as reported by Kantar Media ( a trans-national company that tracks and consults on advertising): 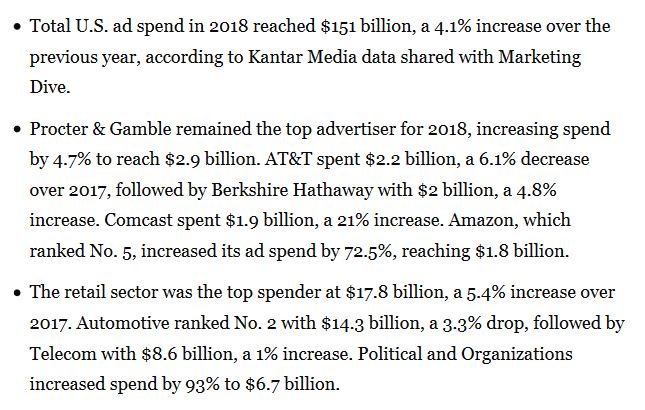 So it seems that there are plenty in the business world who think it’s not about surreptitiously switching bags at the department store counter, so you end up with jeans you didn’t intend to buy but, instead, all about creating impressions in your head not just about jeans but about what it means to be cool, hip, relevant, in fashion, an individual, etc., long before you ever step into the mall, let alone decide you need some new pants.

What’s so fascinating, then, is that we all seem immune from this simple insight when it comes to talking about voting…, when it comes to our assumptions about how political campaigns are run and won. Though, of course, we all know how important each candidate’s ads are (let alone how important some people think it is not to limit corporations from spending on US elections…) and we all seem to judge the viability of campaigns based on the amount of money in their so-called war chests — money that will largely be used for, you guessed it, buying print, television, and online ads.

So, given the virtually commonsense information that we all have about how advertising works and how effective it can be — something at least possessed by those who watched Mad Men — what do you make of the laser-like focus on changing rather than making votes?