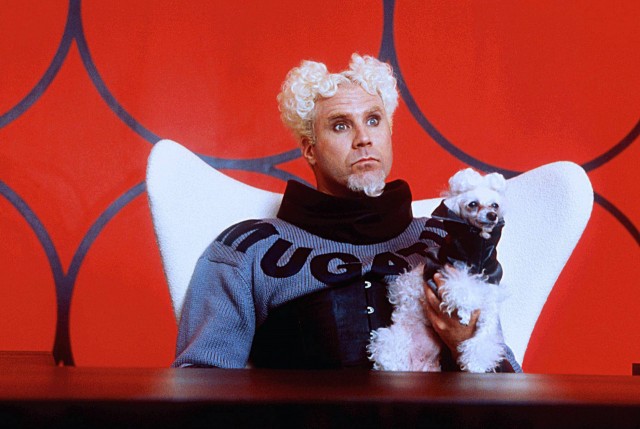 I’ve long known why I like Will Ferrell movies — he always plays it straight. No matter what character he adopts, he rides it as far as it’ll take him, never feeling the need that he has to wink to the audience, to let us in on the secret that he really isn’t that way himself, that he’s just playing a character.

That is, he never breaks the fourth wall.

Sure, he doesn’t take it as far as, say, Andy Kaufman, whose whole life could be understood as performance art (take a look at this old clip from a 1980 appearance):

…, but within the bounds of his films, the arbitrary rules of their narratives, the happenstance backstories of his characters, Ferrell just goes for it.

This can’t be said for all actors, of course, for their comedy is sometimes based on the juxtaposition between the character that they’re playing and the one we presume them to actually be, in real life, making the gap between the two — the persona and, I guess, what we assume to be their authentic self — the source of the irony and the reason we laugh. For somehow we know that they aren’t actually like that — we know they’re playing a character.

I’ve never before linked this taste in movies with certain sensibilities that I have as a scholar, but I did the other day, when I realized why I think it is frustrating to read scholars who seem to feel compelled to tell us what they think of some object of study — whether they agree with it or not — before just getting on with studying it. That is, they offer what I see as a protective, reassuring wink to the reader, to make sure that every knows that they don’t actually approve of this or that thing they’re about to describe, all of us just agreeing to play at being scholars for the time being, knowing that the real consequence lies off stage somewhere, in a normative conversation about how to stop people from doing this or encourage them to do more of that.

What’s curious — and, to me, deeply frustrating — is that such scholars aren’t able to justify the need to study something based on their intellectual curiosities about how the world works but, instead, they signify the item by first placing it into a controlled relationship with some political sensibility that they happen to have (and which they likely assume many readers will also share — hence the presumed need for the wink). The overriding concern seems to be that ho one wants to be seen as supporting the wrong thing, a concern for their own in-group status, presumably.

All of which comes back to a line I read from Jonathan Smith long ago:

In winking to their reader, in breaking the fourth wall of scholarship, by speaking in a moralizing voice not authorized by the credentials that made them authorities on some topic and authors worth reading, all so as to disclose what they really think, such scholars oddly let up on the throttle, failing to press a set of intellectual interests as far as they dare, to see where the limit is and then to study how that limit works, is enforced, where it is vulnerable, etc. Thus, instead of studying how identification works, they seem more concerned to ensure that their readers understand that they exhibit what everyone somehow already knows to be the proper identity.

The curious thing to me, then, is how Ferrell’s approach to comedy empowers the viewer, for he doesn’t provide the norm against which you need to measure the character’s behaviors. Without the knowing glance, without the reminder of what he’s really like (or at least what his publicist wants you to think he’s really like), it’s up to viewers to conjure into existence the comparative standard when watching him play it straight, to thereby produce the gaps and the irony themselves, making them co-conspirators in whatever comedy results rather than what I take to be the far more passive role of being instructed on how outrageous you ought to see the deed by having the role model wink at you.

Which might also be why I get a kick out of Francis Underwood, in the new U.S. version of the old BBC series “House of Cards.” Sure, he winks all the time, but always in character. Kevin Spacey isn’t glancing at us, it’s Frank looking us in the eye, which makes it all the more unnerving.

It may sound odd, but resisting the compulsion to wink, to offer moral judgments, and thereby risking ones own place in the reader’s imagination, is the bolder scholarly way to go, I think, for it challenges readers to step up and to recognize their role in all this, to put their own sensibilities on the table, and to do the measuring for themselves of just what we’ve learned by riding here or there hell bent for leather.