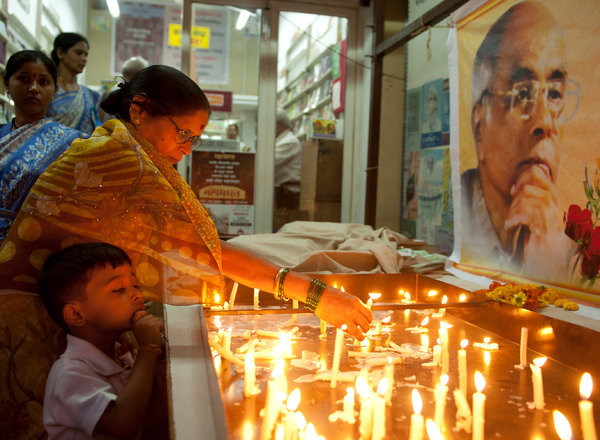 Now seems to be that time: to explore the “sometimes” of that sentence.

The link in those concluding words was to a New York Times article (August 24, 2013; the above photo accompanies the story) on the murder of Narendra Dabholkar, a physician in India who was well known for his mission to set up sting operations to expose trickery among fortune tellers and for reproducing the miraculous feats of holy men but doing so in a scientifically controllable, reproducible, and thus explainable manner. It brings to mind James Randi — the Amazing Randi, as he was known during his earlier career as a magician and escape artist — who has become no less well known, but in North America, for doing pretty much the same, such as this televised example from the 1980-81 season of a short-lived show, “That’s My Line.”

The performer — who, understandably, was trying to offer his own explanations for his failure to turn a page of the phone book with just the power of his mind — eventually confessed to the fraud. And so there’s still a reward for empirical evidence of paranormal abilities — but it’s up to $1,000,000.00 now.

But returning to Dr. Dabholkar, the NY Times article reads as follows:

That mission ended Tuesday, when two men ran up behind Dr. Dabholkar, 67, as he crossed a bridge, shot him at point-blank range, then jumped onto a motorbike and disappeared into the traffic coursing through this city.

Although we don’t know who his killers were, or their motives, assuming, as most everyone does, that it was a backlash against what is widely known as his “anti-superstition” efforts, these two people seem to afford us an opportunity to look at discrete situations in which competing explanatory systems touched one another — but in only one case did they bump so hard that it resulted in violence.

Probably all of us walk around with multiple explanatory systems up and running in our heads, systems that might even contradict one another, like the discrete little ritual that the so-called rational person might employ when, say, he boards a jet or before she gives a public talk (selecting just these examples betrays the theory of ritual that I’m using here, of course). But when do these alternative systems not just touch but so bump up against each other that it leads to some sort of psychotic episode, in the case of an individual, or, when it occurs between social groups with competing interests, acts of coercion and violence?

So why is Randi (b. 1928), who is an avowed atheist and who exposes religious-sorts no less than performers, still going strong and while Dabholkar was murdered?

What factors would you draw upon to account for the startling difference in the outcomes of their shared mission? Better yet, how would you adjudicate between the various explanations that can surely be offered — i.e., does it have something to do with social life in India versus the U.S.? Would you start talking about Hinduism as opposed to Christianity, looking for generalizable differences between them that might account for the difference in responses? Or, for any number of reasons, would you dismiss such generalizations and, instead, go looking for factors within specific individuals, wanting to avoid seeing Dabholkar’s assailants as somehow representative of millions of people? Or might Dabholkar’s activities within Indian politics, working toward anti-superstition legislation, be the tipping point, since I don’t think that the Amazing Randi’s efforts have (yet?) entered state or federal politics?

So what’s the difference — or, better put, how do you account for it?