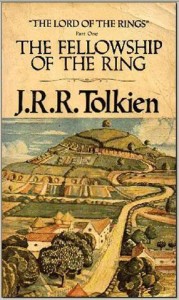 If I’m permitted to range further than my own scholarly expertise, it’s got to be any of those go-to works by Tolkien. My reason? I was a life guard at the local pool throughout high school and within a week or so of the end of grade 12 I broke both bones in my left leg, a little above the ankle, while on a diving board at the pool. (Yes, I was the diving instructor too—irony abounds.) We’d all take two bounces, to do anything in the air that struck us as interesting and who knows what happened to prompt that loud snapping noise that I hear a second before I felt it and flopped into the water. Up until that point in my life I’d not really read all that much; tackling 2001: A Space Odyssey in grade 7 or 8 was pretty rewarding (how cool was that monolith, right? And what about the last line concerning “a silent detonation that brought a brief, false dawn to half the sleeping globe”!), but, at least as memory serves, that was the only novel I’d so far read and enjoyed; all other reading was required for school and thus a task to get through. (Why did we have to read Four Feathers? And what was with all that dystopic stuff that one year—“beware of thy mutant” and soma vacations…?) Oh, and I also grew up in a gas station, owned and operated by my parents, with no other employees and my older siblings long out of the house. So it was a pretty hectic place, with people coming and going and the sometimes relentless “ding ding” of the bell going off every time a car drove in across the hose, announcing another customer. So into this context was introduced the immobility and slowed life that comes with a full leg cast for the entire summer of 1979. I don’t recall who recommended The Silmarillion to me but I read that one first, then moved on to the various Lord of the Rings volumes, and, in suitably backward order, ended with The Hobbit—those were the first books I ever read in that manner you hear people talking about, as if they had entered the story by becoming so engrossed in it, rushing to get back to it after dinner. I wasn’t a particular fan of scifi or fantasy, but for whatever reason, that summer I experienced reading in a whole new way. Now, I don’t want to be melodramatic, but I sometimes wonder what would have become of me, career-wise, had I not broken my leg on June 13, 1979, and had I not learned to—well, been forced to, really—take time to read. For, along with writing and talking, it eventually became one of the primary ways that I earn my livelihood today.