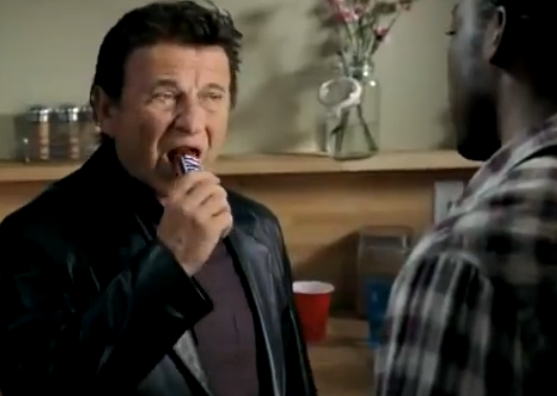 Here in the U.S. there’s an ad campaign for Snickers chocolate bars, in which hungry people turn back into themselves only once they have a snack.

For example, hunger might turn you into an entitled diva:

Or worse — you might end up as a paranoid, irritable Joe Pesci — and nobody wants that.

But what I find kind of interesting is that the celebrities in these commercials are used to signify the dark, aggressive side of these hungry but otherwise ordinary and thus mild-mannered people.

Even the one featuring dear old Betty White fits the mold:

“Mike, you’re playing like Betty White out there.”
“That’s not what your girlfriend said…”

But then we come to one in which the celebrity plays both roles and, curiously, it’s a now well-known former college football quarterback, Johnny Manziel.

The thing is, that in order to signify the changes that come over us when we’re hungry, and which their product can (thank heavens!) alleviate, the advertizing execs opt to turn us all into far more aggressive people — until, that is, they feature a protagonist who is known to us precisely for his participation in an already overly aggressive domain (i.e., professional football).

So how to signify the dangerous, self-altering effects of hunger in his case…? Feminize him, of course, and then have his teammate walk in to rescue him wearing full equipment (look how wide those shoulders are! But who walks around dressed like that?), which “Johnny Football” himself, as he’s been known, turns into only once he’s tasted the chocolatey mix of nougat, caramel, and peanuts. And voila: Goodbye “Johnny JamBoogie.”

The moral of the story? While I wouldn’t want to be so simplistic as to say that we’re simply juxtaposing masculine to feminine stereotypes, it would be accurate, I think, to at least say that, though parodies, the commercials are effective because the dangers they say their product will address are situations in which we are turned into our feared opposite (an opposite that normalizes the role we seek to return to, of course): for regular Joes (for they’re all guys in the first three I chose) the danger is becoming overly aggressive (hyper-masculinized, perhaps, despite women used to represent the danger in some of the commercials — that’s probably what makes them funny, for who doesn’t want to hear Betty White talk like a sailor?); but for already masculine role models the danger is doing aerobics with the ladies.

(I don’t know about you but I get a little sleepy when my blood sugar dips, but a commercial featuring lots of yawns probably won’t move the product.)

We all know that an aggressive, irritable football player doesn’t signify a dangerous altered state but, instead, likely signifies normal operating conditions — at least on the field. That the National Football League is currently having a rough time dealing with the bad PR that’s resulted from a spate of high profile domestic abuse cases involving some of its players when off the field means that we might see a new campaign in the future, trying hard to soften and humanize their image….

Come to think of it, that already exists.