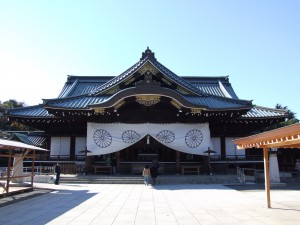 Our reactions to events are products, in many ways, of the ways the information about the event has been framed. Despite rhetoric of individual freedom, those who produce information have a huge influence. These limitations on our choices came to my mind recently as I read news articles (Washington Times, Washington Post, BBC, Bloomberg) about Shinzo Abe, the Prime Minister of Japan, visiting the Yasukuni shrine on December 26, 2013.

The Yasukuni shrine, commonly associated with Shinto, was built in the latter nineteenth century to honor those who died in the Meiji restoration in Japan. Since then, other figures who sacrificed their lives for the nation have been enshrined as kami there.  The shrine, in this sense, does not conform to American notions of the differences between nationalism and religion.

The shrine, though, generates significant controversy across Asia, as the more than two million kami enshrined there include fourteen convicted war criminals from World War II.  Some opponents, even among the Japanese, also question the interpretation of Japan’s involvement in World War II, which the shrine narrative largely characterizes as a necessary intervention to challenge European and American imperialism rather than Japanese aggression, as many others interpret it.

Therefore, whenever a major Japanese political leader visits the shrine, people in other parts of Asia protest, seeing it as honoring those who committed atrocities in Asia and fearing that it reflects a bellicose Japan. News reports from Abe’s recent visit focused primarily on the reactions from China and Korea and connected the events to the recent tensions in East Asia over islands that both China and Japan claim.

What caught my attention was the focus in the news reports on the diplomatic implications and political factors, generally condemning Abe’s “provocative” visit. One BBC report directly dismissed any non-political explanation. The only time that the question of “religious freedom” arose was when a few reports, such as Bloomberg’s, quoted a Japanese official justifying the visit as a personal act of religious freedom. This media framing contrasts strongly with the framing of other stories, such as legislation in Iran and Russia that some see as reducing religious freedom. Perhaps the focus in those cases on religious freedom reflects the connection between the practices under threat and the author’s notions of acceptable or beneficial religion.

My interest is not to justify Abe’s visit to Yasukuni but to highlight how the labels of politics, religion, diplomacy, and freedom frame “descriptions” of events and thus influence what information writers deem important to include and how we then view them. A simple description, then, is actually impossible to create because the framing reflects the author’s assumptions and ideological positions. This issue gives greater significance to Conan O’Brien’s recent montage on the scripted nature of news stories.

Of course, the same issue of framing applies to scholarly “descriptions,” whether they involve historical narratives, ethnographies, or philosophical accounts.

One Reply to “Framing a Shrine”