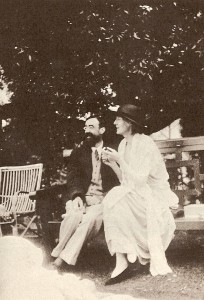 Discussing her observation of a man and a woman getting into a taxi, Virginia Woolf declares in A Room of Her Own,

The sight was ordinary enough. What was strange was the rhythmical order with which my imagination had invested in it.

While her statement was not a universal assertion that all ordering of observations is an act of the observer’s imagination, throughout this work, originally published in 1929, her writing impressed me with its sophisticated engagement with criticism simliar to what we generally label post-modern analysis. She begins with her recognition of the multivalence of the topic “women and fiction.” She highlights the exclusions and lacunae (particularly in relation to women) within the standard historical narratives that belie particular ideological positions. She repeatedly acknowledges her own positioning through a self-reflexive style.  Throughout the work she raises various critical questions about the constructions of histories and identifications and the interests and ideologies that inform those constructions that we in Culture on the Edge often employ.

It is not that Woolf’s assertions are beyond critique (particularly her constructions of gender and the products of creativity), as future generations, not to mention contemporary colleagues, will highlight limitations in my own analyses, but recognizing these methods in a work written a half-century or more before they became prominent among academics illustrates the arbitrariness of our own classifications of academic approaches and eras. “The rhythmical order,” to usurp her words, of such designations like post-modernism are investments of our imaginations, like other systems of classification, that scholars often employ to distinguish themselves from their predecessors. This point is not to ignore differences in approaches but to acknowledge how those eras and current methods are not precise descriptions but are our own constructions, for our own purposes.

One Reply to “Imagining Eras”