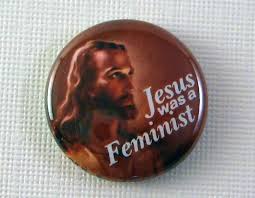 I received a touching note from one of my graduating seniors this past week, who said, among other things, that I taught her that she didn’t have to fear calling herself a feminist.   Every time I have a student tell me this, I consider the irony of my own response when, as an undergraduate, one of my Religious Studies professors handed me a photocopied article entitled something like “Jesus Was a Feminist.” I don’t really remember the details of what the author said, except for the basic thesis (now considered quite tame) that the Bible depicts Jesus as a person who cared about gender equity in a society that didn’t. I freely admit that, at the time, I had no academic exposure to gender theory, and even though I was acutely aware of sexism, I had never heard the term “feminist” used in a positive light. In short, I remember being appalled at the article.

Fast-forward a couple of decades, and I am now a person who proudly aligns herself with that label. Like many other feminists, I understand feminism as the identification, interrogation, and dismantling of various forms of identity-based oppressions, including the well-known arenas of sex, gender, and sexual orientation. Feminist studies is not, however, limited just to sex and gender issues, but is a field also highly interested in the ways that those realms intersect with race, class, age, ability, and many other forms of social identity.

In light of this definition, I share the frustration of others when I hear feminism equated with hatred, or when others attempt to render it irrelevant by claiming that, as a society, we have resolved most major forms of bias. While I would love nothing more than for that sort of irrelevancy to be true, the improvements that have been made on the gender front (to name just one example) have been met with equally formidable setbacks and stagnations that make gender and other forms of social inequity very real, indeed.

However, rather than go down that familiar road where I tell you about how awful it is that many misunderstand what feminism is, my interest in discussing the term returns back to familiar territory for this blog, where we’ve talked frequently about the strategies behind naming. Craig Martin recently published a post considering the rhetorical power of an oversimplified (yet effective) definition of feminism. I’d like to piggyback on that topic by further considering the possible identity dynamics involved when one agrees with the major tenets behind feminism but is hesitant to claim the name.

While there have been organized movements of progressives who have rejected the term “feminism” for a variety of reasons, I suspect that most who admire feminist concepts but reject the title do so because of a very popular idea that feminism is such a bad, radical, or otherwise nasty thing that no likeable person would willfully adopt it. This is certainly one of the most frequent ways that I find myself discussing the term, for almost all of the students who take my gender and feminist theory classes find a lot of personal resonance with feminist ideals, but most report having to put up with a fair bit of harassment from family and friends for taking a course related to feminism in the first place.

But what is important to point out is that the negative connotations given to the term “feminism” are no historical accident. Every major feminist movement that has taken place in the U.S. has been met by staunch opposition, with each new opponent claiming that feminism will annihilate everything good about American culture. Of course, the nation appears to have survived these shifts, which have included campaigns to give women and other minority groups voting and basic civil rights, educational access, equal wages for equal work, reproductive control, and most recently, equal marriage rights. Although a few of these items still remain controversial, the majority of Americans, when polled, find most of these items agreeable, and yet, again, comparatively few of them identify as feminists.

Much of the anti-feminist rhetoric that punctuates politics today is a recuperation of themes from the 1960s and 70s, when predominantly white, conservative Christian groups reacted negatively to a greater equalization of power relationships for women and racial minorities. My recent book on the group Concerned Women for America (CWA) provides an overview of the myriad ways in which CWA has engaged in decades of anti-feminist advocacy by claiming that working women, lesbians, and liberals, in general, are embodiments of a moral ineptness that will taint, and destroy, American culture. Despite its longstanding trend of blaming feminism for most of America’s problems, CWA has recently begun to call itself a “true” feminist organization by claiming that traditional gender arrangements actually maximize female empowerment.

Many progressive voices have cried foul at CWA’s changing self-representation on the matter of feminism, charging it with the height of hypocrisy. However, for those of us interested in the mechanics behind identity-building, I suspect that the lessons to be learned from these adoptions and refusals of the term “feminism” is that our self-identifiers often have less to do with our own beliefs and positions than they do with whether we will be read as socially valuable when (and if) we own the term. For CWA, rejecting but then later claiming feminism has been a part of a sophisticated move to render itself more powerful in different cultural circumstances when feminism has been either less or more (respectively) popular. To be clear, CWA’s ideology hasn’t radically changed; its term for what it calls its ideology has. And while my own decision to own the term “feminism” came about as my ignorance and fear about the term faded, it was only when I was introduced to the term as an acceptable (if not admirable) label that I had the courage to call myself the same. Again, I didn’t experience a fundamental ideological change, but adopted a new term to describe it.

So when I say that “I am a feminist,” I am not only making a statement about how I think that the world should operate, but I am also acknowledging the specific way that it currently operates for me: at present, most of my major professional and personal relationships are not threatened by my adoption of the term, and if anything, they are aided by it. I have enough privilege to be able to use it without much social flack, and thus I use it consistently and openly in the hope that I will normalize it for others. While the term “feminism” is a veritable gold mine in discussions of identity politics, what I think this instance demonstrates is that the terms that we use to describe ourselves may often have far more to do with being perceived as normal than being perceived as right.

One Reply to “Who Are You? I’m a Feminist”