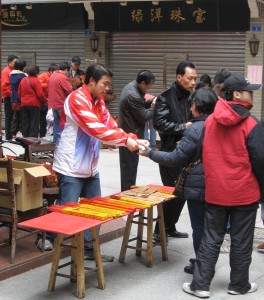 While people sometimes refer to the persistence of belief in some sort of Supreme Being within the United States as a challenge to or revision of assumptions about secularization, my interest here is the persistence of the belief that practices identified as religious have an innate connection to belief. That belief is the foundation for viewing those polls as contradictory. Moreover, Madsen fails to question the declaration that all of these practices  (venerating ancestors, participating in festivals, gaining good merit, etc.) are obviously “religious”.

Madsen resolves this by constructing “the social nature of indigenous Chinese religion,” a claim that reads the modern label “religion” back in time to community practices that started with the family and then linked families together as communities. Through this construction, Madsen can conclude,

Religious practice has as its principal focus the pragmatic requirements of discovering new forms of community in a dynamic modern world.

Now the self-evidently “religious” practices make sense, despite the lack of theism, because of something inherent in Chinese society (another contemporary concept read anachronistically). Through these moves, Madsen enables particular beliefs not only about the positive, universal nature of religion but also the division of the world between national societies (Chinese/not Chinese) to persist as natural, obvious descriptors.