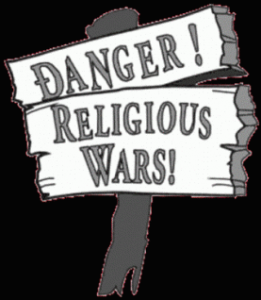 During the 1800’s, British colonizers identified particular conflicts as being “religious,” a description that many now describe as part of the British strategy of Divide and Rule. Scholars have noted examples of British accounts of “religious conflict between Hindus and Muslims” whose details, as the British recorded them, actually undermined such assertions, as participants whom the records identified as Hindus and Muslims participated on both sides of specific conflicts.

Such constructions are not really a thing of the past. “India’s Electoral Politics Reignited Religious Hatred,” a recent blog post on India Ink (a New York Times blog) highlights a recent increase in violence in parts of Uttar Pradesh, India. Though the headline describes it as “religious hatred,” the article itself refers to political conflicts and mobilization as well as economic tensions. Relating the current rise in violence to similar events in the 1990’s, two political science professors describe a significant source of conflict as

the resentment of entrenched upper caste Hindus against the ruling parties that “pampered” Muslims and lower caste Hindus, with affirmative action like reservations in government jobs.

So, the conflict could perhaps be described as “economic hatred” compounded with “political rivalry”. So, why turn to “religious” designations, even as some of the tensions are between groups commonly identified as Hindus? For some politicians in India, perhaps it is a calculated move to wrap their ideological position in a mantle of “religious tradition” that mobilizes an emotional response to the threat to one’s tradition. Perhaps, the “religious” gives a justification that fighting for economic opportunity does not.

Yet, many authors outside India, who may have limited investment in the economic and political outcomes in Uttar Pradesh, continue to reinforce the “religious” label. Beyond generating sensational headlines, the assumption of religious violence in India fits particular contemporary assumptions about the “Other.” Perhaps more significantly, the focus on religious hatred can also neutralize the spectre of global economic inequalities and the benefits that many in America and Europe experience from the perpetuation of that inequality. Perhaps many continue to reproduce the ideas of those greedy, self-interested, cruel colonizers because those ideas also serve contemporary interests.

2 Replies to “Why religious hatred?”