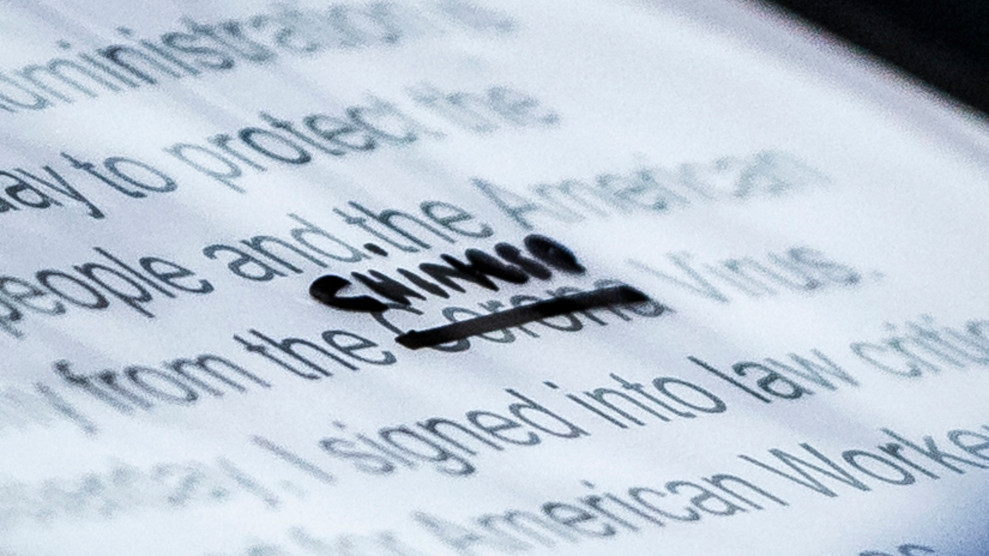 Most by now are familiar with Donald Trump’s insistence that COVID-19 be referred to as the ‘Chinese‘ or ‘Wuhan virus.’

In one sense, pointing out gaps in Trump’s logic is, in effect, to gaslight one’s self. After all, he tweeted that COVID-19 was less harmful than the flu as late as March 9th, then swiftly moved to accept its growing impact on March 11th. By March 16th, he had switched from calling it coronavirus to the ‘Chinese virus.’ More recently, Trump declared that the economy must be back on track by Easter, despite warnings from experts that COVID-19 will likely be peaking in much of the US at that time. On March 29th, that date was pushed back from Easter until April 30th. I could go on …

If we view Trump as a strategic actor who is utterly shameless in defending his interests, then his ‘logic’ does indeed make sense. Consistency and accuracy regarding the science of COVID-19 (or any topic, for that matter) are tools to be used or discarded as it suits his advantage. Considered in this light, the term ‘Chinese virus’ can be seen as a rhetorical device that aims to divert attention from the Trump administration’s many failings throughout this affair by reducing culpability for the spread of COVID-19 to one main variable — China.

I imagine that many would agree with my assessment here as we have seen this playbook repeated time and time again. While it may be obvious to some that Trump is using this term to suit his interests, one thing that this episode highlights is how many commentators, from news pundits to social media threads, have not learned the most basic lessons of post-structuralism and critical discourse theory. Indeed, in recent weeks I have come across a (not) surprising number of people — both supporters and detractors of Trump — absorbed by debates over the true meaning of the  ‘Chinese virus,’ as though it is a stable signifier that somehow points to what we want it to.

One such example comes from the show Rising on the news site The Hill, where Saggar Enjeti (in an otherwise nuanced debate between him and co-host Krystal Ball) states the following:

I think we should give enough people credit that no one is going to hear the term ‘Chinese virus’ or Chinese coronavirus and use that as an excuse in order to bully or attack people. This is a geopolitical point because the Chinese government has made clear … that they want to gaslight the entire world into believing that the virus did not emanate from China because it would absolve them from the pandemic cover-up in the first two months of this entire thing.

Enjeti goes on to argue that,

What I care about is bringing our supply chains back to the United States so that American workers benefit. That’s it. That’s all I care about. … I think it’s a linguistic proxy war over a much deeper policy debate.

For Enjeti, the term ‘Chinese virus’ does not have an effect on how people relate to Asian Americans (although he later concedes that it can). Instead, it points to the culpability of the Chinese government throughout this crisis, while serving as a “linguistic proxy war” that masks the underlying problem of outsourcing to China and the need to return production to US soil for the benefit of American workers. While Enjeti’s first argument may be factually correct, and his second point economically debatable, it should be self-evident that his claims exist among numerous other interpretations. By focusing attention on the ‘true’ or ‘ultimate’ meaning of this term, Enjeti misses an opportunity to analyze the various social effects that the discourse on the “Chinese virus’ has had — e.g., in shaping public debates, people’s perceptions, and on communities marked as “Chinese.” Which takes us back to post-structuralism and the broader method of critical discourse theory.

By post-structuralism I refer to the idea that language is a fluid object that multiplies in meaning as it move through different chains of signification (e.g., Chinese + virus +                 fill in the blank). Regardless of what people might intend to mean when they draw on such terms, words and phrases are always used for a variety of purposes. This is especially true when referring to broad categories that signal many things at once (like ethnicity and nationality), where meaning is contingent upon the context (e.g., a presidential address vs. a chat room) and the cultural dispositions of the speaker(s) in question (e.g., an Asian American vs. an academic egghead like me). Sara Ahmed offers a useful touch-point here when she examines how this process works in relation to the term “Islamic terrorism” in her essay “Affective Economies” (2004):

Importantly, the word terrorist sticks to some bodies as it reopens past histories of naming, just as it slides into other words in the accounts of the wars in Afghanistan and Iraq (such as fundamentalism, Islam, Arab, repressive, primitive). Indeed, the slide of metonymy can function as an implicit argument about the causal relations between terms (such as Islam and terrorism) within the making of truths and worlds, but in such a way that it does not require an explicit statement. The work done by metonymy means that it can remake links—it can stick words like terrorist and Islam together—even when arguments are made that seem to unmake those links. Utterances like “this is not a war against Islam” coexist with descriptions such as “Islamic terrorists,” which work to restick the words together and constitute their coincidence as more than simply temporal. The sliding between signs also involves “sticking” signs to bodies: the bodies who “could be terrorists” are the ones who might “look Muslim” (131-2).

Following Ahmed, we might ask what kind of work does ‘Chinese virus’ do as it enters into different “affective economies” — or, to simplify her terminology, different combinations of (emotionally-charged) words? On the most basic level, we have two words, ‘Chinese’ and ‘virus.’ The first points to a country, language, and an ethnicity, while the latter is an infectious disease. Bringing the two together thus opens up space, at a minimum, for negative associations toward this country/language/ethnicity when it is paired with this other (harmful) thing.

A recent article in NPR highlights this point rather nicely when discussing the World Health Organization’s decision to name the virus COVID-19: 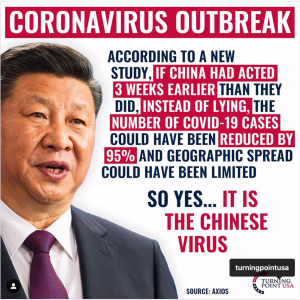 If one needs more evidence of the negative effects that terms like ‘Chinese virus’ can have on certain communities, social media outlets supportive of Donald Trump such as Breitbart, Turning Points USA, and Praeger U provide a treasure trove of data, ripe for the taking. While all of these sites have been pushing the ‘Chinese virus’ narrative in lock-step with the Trump administration, it is (almost) always presented in the form of ‘factual’ information (see TPUSA image to the right). This recalls Ahmed’s statement on how metonymy or the play of words can make and remake links that co-exist, together. In this sense, terms like ‘Chinese virus’ can simultaneously point to certain facts while also appealing to emotions and identity — as she puts, by “‘sticking’ signs to bodies.”

Consider, for example, two hashtags that accompany the above TPUSA Instagram post: #CommunismKills, and #BigGovernmentSucks. Here ‘Chinese virus’ is combined with tropes that link China’s alleged mishandling of COVID-19 with their political system, thus attempting to bolster the legitimacy of private enterprise and ‘small government’ as the best (or only) way to handle this crisis. A quick glance at the comments section reveals a wide variety of posts that variously affirm or contest this narrative, including: insiders’ support for this statement (e.g., “Chinese American here: I agree”), racialized language such as “kung-flu” (a term that Donald Trump Jr. has recently been promoting), statements like “We’re being demographically replaced in our own country,” and calls to go to war with China and wipe them off the map (among myriad other claims).

One does not need to search very far to see some of the effects that these narratives have had on Asian Americans, as well as on minorities in other Euro-Western states, as seen with the hashtag #JeNeSuisPasVirus that started trending in France in January, and elsewhere around the world (e.g., in India). Indeed, two recent features in the New York Times detail how Asian Americans (including people with “families from Korea, the Philippines, Myanmar, and other places“) have been spit on, yelled at, and physically assaulted. Several sites have been dedicated to reporting such incidents, noting that they’ve never seen such levels of hostility, while gun sales to Chinese-Americans and green-card holders from mainland China are at an all time high. 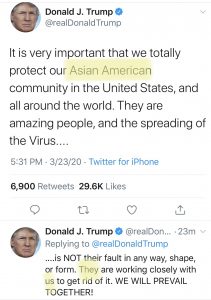 Similar dynamics played out against Muslims in the wake of 9/11, and when governments in France and Québec attempted to either ban or place limits upon veiling practices for women. While many have theorized such episodes in relation to fear, racism, nationalism, and the relative balance of power, one dynamic that is rarely considered is how terms like ‘Chinese virus’ not only “stick” to other things, as Ahmed lays out above, but also how they allow proponents of such terms to slip and slide away from negative associations, such as racism, precisely because they can and do mean multiple things, despite their clear effects on certain communities.