During last year’s Gilmore Girls: A Year in the Life revival on Netflix, I kept hearing viewers basking in acknowledgment of a reference lost on me. In the scene, a wealthy and recently-widowed WASP declutters her mansion while wearing uncharacteristically casual clothes. The woman is in crisis and ready to make a change. She marshals some hired help to move large objects in her mansion while she scrutinizes the smaller items.

At one point she says, “If it brings you joy, you keep it. If it doesn’t, out it goes.”

Now I finally get it…

The axiom is an allusion to professional organizer Marie Kondo. Kondo is author of the international best-seller, The Life Changing Magic of Tidying Up: The Japanese Art of Decluttering and Organizing (New York: Ten Speed Press, 2014), and now host of the Netflix sensation, Tidying Up with Marie Kondo.

From what I gather, the show follows Kondo imparting her “KonMari” method to messy American householders. Kondo guides clients on tour of their home, helping them to classify objects by type, to reframe the items’ role in a balanced home, and to determine whether each object brings joy (justifying its place in the home) or no joy (leading to its removal). On the show, clients make a “ding” sound and gesture upward as they rediscover satisfaction in their possessions.

As Religious Studies professors kickoff their semesters, this TV show could make for an interesting case study in phenomenology. Some students will no doubt consider the role of Shinto in Marie Kondo’s technique and the animistic quality in other contemporary cultures of cleaning. (As a teenager, Kondo spent time cleaning in a Shinto shrine.)

I don’t have much space in my schedule for staying current with the latest streaming events. But I’ve been on Facebook enough to see that the KonMari method has sparked controversy with bibliophiles. Maybe you’ve seen variations of this meme, too. 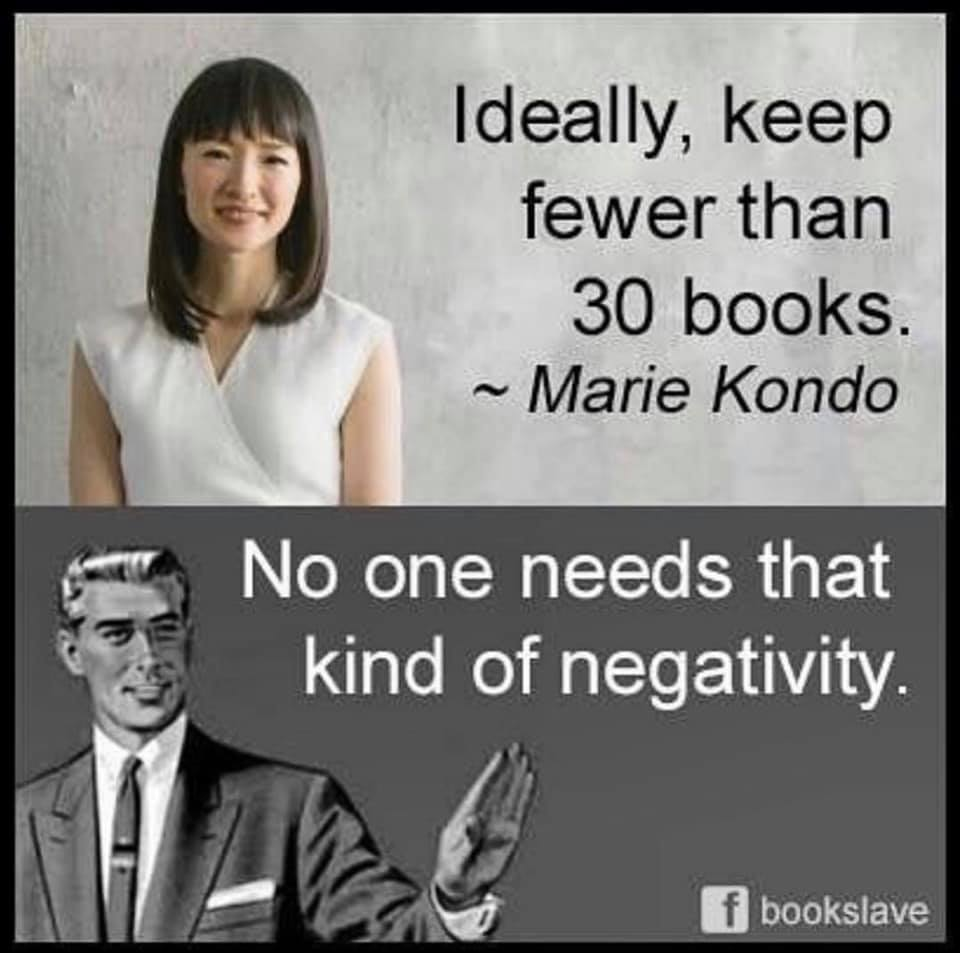 My newsfeed is filled with a bookish sort, so I had to look into this. In so doing, I stumbled across an interesting clarification in an Indiewire article. Kondo says:

“I grew up in Japan, and the climate there is very humid. So it’s damp and the moisture in the air causes lots of damage to the books. It’s not great to have a lot of damaged books. The books themselves won’t even open, they’re so damaged,” … “So if you’re retaining so many that you’re not reading, you might have to let go of some. But I’ve learned through this experience that’s very different in a foreign country where the climate is very different, and you’re able to keep the books in beautiful condition. Plus, you have more space to keep them, and that’s perfectly fine, so that’s one of the biggest things I learned through this process.”

As I read her response, I started to imagine Kondo and the meme’s purveyors as exemplars of so many contests about significance. In this case, the question appears to be who loves books more.

The offended book-lovers of social media correlate the size of a personal library with their devotion to books. Pierre Bourdieu’s work might push us to further identify the social capital for which these books are tender.

Kondo’s point highlights some of the cultural assumptions upon which that love is dependent (cf. habitus). Were she petty, she might ask critics whether they’ve given thought to preservation efforts or whether hoarding little-read tomes keeps them from fulfilling the books’ ultimate purpose–to be read. If we are going to fetishize books as phenomena unto themselves, then what’s to keep someone from reclassifying one’s precious shelved books as the wards of an estate? Where’s the love in that?

Beyond asking students to search for the place of kami on this side of capitalism, KonMari provides a chance to reexamine how there’s nothing tidy about the things we love. They have histories, contexts. politics, and significance…but we give them those things. We just don’t always enjoy remembering that.

Maybe that’s the essence of culture.