I began writing this blog post the day after a video featuring Covington high school students taunting a Native American man went viral. When I returned to the piece a few days later, the story had blown up like few that I can recall in recent memory. The initial narrative, which was clipped from a 2-hour video, posted on Twitter, and seized upon by the press, created the perception that the high school boys had surrounded Nathan Philips (e.g., see this NYT piece), an Omaha elder and activist, sparking outrage across the media spectrum. At the center of all this was the image of a young man in a MAGA hat (pictured below) starring smugly at Philips as he played a drum song (see Leonard Peltier’s explanation of the song here) . As the extended 2-hour video emerged, this narrative quickly gave way to feverish debate over the mainstream media’s ‘liberal bias’ in their rush to condemn the boys without getting the full context of what took place by the Lincoln Memorial in Washington D.C. Accordingly, much of the mainstream press turned the lens on themselves through acts of contrition, as with the following article, “Rush to judgment on Covington school standoff should be a wake-up call for media” – CBC One of the more interesting exchanges that I encountered on the media’s initial response to this story came from the Joe Rogan Experience, a popular podcast out of Los Angeles. In this clip, Rogan sits down with New York Times columnist Bari Weiss (pictured left) to discuss the fallout from this affair. Here Weiss pontificates on what was wrong with the media’s initial response:

Bari Weiss: “The challenge of what it means to be a journalist is to not see people as signifiers or as stand-ins just based on their identity. And that’s what 95% of the press core did. … They leap to assume that our visceral reaction was accurate, when in fact, when you actually look at the 2-hour video … it was not that at all.”

A little later in the interview, Weiss quips:

My thing is, your initial reaction to something is not the truth. It’s your emotional reaction.  And anyone who calls themselves a journalist, like your job is to figure out the facts of the case, not to make this into a kind of identitarian morality play. And the fact that so many people, in so many publications did just that, and in fact when the real facts surfaced just sort of dug their heels in and were basically like, ‘well he’s a stand-in for the white patriarchy.’ What? That’s crazy! … You’re really going to put that on a 16-year old?

Joe Rogan: Well it’s cruel. It’s a denial of the individual. It’s very cruel. Um, when you’re 16-years old you’re basically a baby. You don’t know what the fuck you’re doing … you’re incredibly susceptible to the influence of your peers …

While it is true that the boys did not surround Nathan Philips (he had in fact approached them), and were quite possibly confused by his stated intention to act as a peacemaker between them and a group of Black Israelites, who, it is worth noting, are known to be provocateurs, Weiss and Rogan’s emphasis on the specific details of this incident reflect what I refer to as the tyranny of individualism. By this I mean the tendency in Euro-Western cultures to center the individual as the locus of meaning (e.g., her agency, beliefs, and intentions). This often results in downplaying (or ignoring) how “signifiers” provoke “emotional reactions” precisely because they “stand-in” as symbols for real and existing material conditions as they are experienced by different groups.

What is more, the asymmetries of power to create, shape, and control narratives like this one are contingent upon the existing reservoir of knowledge that is available for people to speak the same language (e.g., we “know” what a MAGA hat might stand-in for, but how do we represent a Native American drum song?), which tends to disadvantage groups (like Native Americans) whose histories have been kept on the margins.

By way of analogy, in her book This is Why We Can’t Have Nice Things: Mapping the Relationship Between On-line Trolling and Mainstream Culture (2015), Whitney Philips touches one the ways that signifiers function with reference to the common use of the ‘n-word’ among online trolls, who will often claim, when challenged, that it’s not meant to be racist, it’s just “for the lulz.” As she writes:

…trolls are fully aware that this word is the furthest thing from a floating, meaningless signifier. In fact, they depend on the political significance of all the epithets they employ. Echoing Judith Butler’s analysis of hate speech, which posits that racial epithets always already gesture toward their own history regardless of what a person means when he or she uses hateful language, trolls need their language to contain a kernel of hate. From the trolls’ perspective, this is a purely practical point. If the epithets in question weren’t politically contentious, they would be useless as trollbait. (96)

Following Philips analysis, I want to suggest that part of what has guided the strong and polarized reaction to this story is how it appeals to different sets of signifiers, which are attached to competing group identities.

For those sympathetic to the Covington high school boys, the image of a lone Indigenous elder beating a drum in a crowd of cheering and jeering teenagers did not appear, at first, to offer any sort of defense of their behavior. It just looked bad. When the 2-hour video emerged, however, it not only provided the boys with some plausible deniability (e.g., they did not surround Philips as initially suggested), but also created a counter-narrative where they could be positioned as victims — of a ‘liberal’ media that has increasingly been characterized as ‘fake news,’ and of the Black Israelites, who were taunting them in a way that was read as an attack on their whiteness, and on their conservative Christian values. In this way, a victim narrative was born to counter-act the strong indictment that the initial viral image produced.

For those sympathetic to Nathan Philips, the image of a young white man in a MAGA hat staring-down an Indigenous elder signified not only an embodiment of power and privilege (read: white, young, and male), but also conveyed a feeling of callous disrespect through his particular mode of defiance (i.e., his expression, his hat, and his presence among a large group of jeering friends), signaling that he was the one in control and had nothing to fear (even Bill Maher adopted a variation of this narrative). For anyone familiar with the history of race relations in America, including settler-colonialism and its effects on Native Americans, one could hardly imagine a more pointed symbol (and reminder) of past and current power dynamics reflected in a single pose. 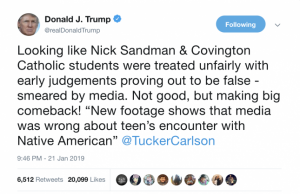 Much else could be added to this narrative, depending on what sources one pays attention to, including the two very different reasons that brought the boys and Philips to the National Mall — the anti-abortion March for Life and the Indigenous Peoples March — adding further layers of gender, sexuality, and race into the mix. The Covington boys have even received support from Donald Trump and have been offered an official invite to the White House, which highlights the role of political power in shaping the symbolic field (*note to self/readers: a comparison between this narrative and the one that emerged under Obama featuring Henry Louis Gates Jr. is a goldmine in waiting*). While this story is a prime example of identity politics, tribalism, media culture, and contested national identities, it also reflects how dominant cultures are able to shape narratives by virtue of what stories have been naturalized in the mainstream imagination vs. what remain relatively obscure or unknown. This is especially true of Indigenous-centered narratives, which barely registered in most mainstream reporting of this event, despite the centrality of an elder with a drum. In this sense, signifers that can’t be easily read by the majority (i.e., a drum song vs. a MAGA hat) tell us something about the relationship between knowledge and power (you know I’m talkin’ about Foucault), as well as how marginal identities often get read through more popular signifiers (e.g., left wing protest, ‘social justice warriors,’ racism in general, etc.) as their symbols are defined on outsiders’ terms.