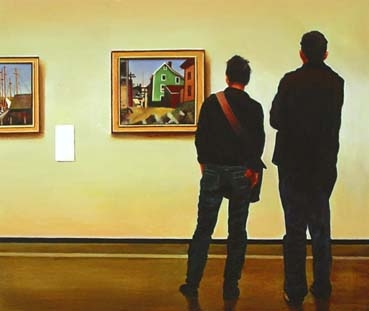 In the initial post responding to the Reza Aslan/Fox News interview, Craig Martin brought our attention to the ways in which similar logic can be used to launch competing identity claims.  Particularly resonant for me is a quick anecdotal move in his post that contains much when considered carefully.  He notes, “When I go to the American Academy of Religion annual meeting, I see lots of scholarship production tied to scholars’ identities, and much of it is very political.”  I know exactly what he means.

I am a literary theorist by training whose research emphasizes sites of production regarding gender and race, especially in the American South.  With this kind of academic background, conferences have always been something of a sticky wicket for me.  One of my professors in graduate school advised me, “The academy is one big cocktail party.  You find the group that interests you, head to their corner, and join in on the conversation.”  A hopeless introvert, I don’t mind admitting that her metaphor terrified me.  I’ve never really learned the art of seamless conversational entrances and exits.  I imagined the whole experience of carving out my academic niche among other people to be like speed dating…except with all of the awkward anxiety and none of the romance.  However, I was also a plucky grad student at the time, very eager to do some productive networking and find some scholarly comrades of like mind.  “That’s how opportunities find you,” my Ph.D.  faculty mentors assured me.

So I struck out like Goldilocks, experimenting outside the MLA with a few different conferences for each of my specific areas of interest in order to find the one or two that would be “just right.”  I presented work at meetings focusing solely on the American South, on popular culture, on Black and Diaspora Studies, on Women’s Studies, and even on interdisciplinarity as a topic in itself.  I’ll spare you the hits and misses of particular conference experiences (which include a presentation that consisted entirely of a string of Ani DiFranco lyrics in a powerpoint slide show that was supposed to make the audience realize that music can…wait for it…have feminist themes!  The nods of serious consideration from the crowd made this feminist want to swallow my Bic pen), suffice it to say that I was left with some productive scholarly exchanges and business card swapping but nonetheless dissatisfied that I had not found my corner of the cocktail party.

Ultimately, once I found myself working in a Department of Religious Studies, I realized that the next group with whom I should flutter into conversation was congregating annually at the American Academy of Religion.  At this point, several writing projects and a few years of nomadic conference-going had me thinking less about this or that specific piece of data and much more about sets of questions I had regarding how those data were treated by various discourses, including and often especially academic ones. Pragmatic concerns of money and time kept me focused for a couple of years on presenting primarily at the National Women’s Studies Association (NWSA) and the American Academy of Religion (AAR).  These were the big ones, after all!  Plus, they would allow me to tease out some of the finer points I had been working on in relation to thematics of “women and religion,” a topic on which I was teaching and writing.  I had finally settled into a good conference groove, swimming in the soothing waters of intense academic engagement…I thought.  Here’s what I found instead.

I went to the NWSA, presenting on a panel entitled “Women and Religion.”  This was my chance.  I’d finally get to pick the brains of feminists who were incorporating studies of religion into their work and see how they were tackling the intersection.  I was giving a paper that dealt with some of the issues of category claims and classification politics in “women and religion” courses/syllabi.  I was eager for feedback.  I went first.  The other person on the panel (ours was touted as a special session, kept purposefully small for the sake of good discussion on a complex topic) gave a presentation on what she called “heart-centered pedagogy.”  Her point as I understood it was that yogic practice and ideology can make for better learning environments.  Women, of course, are particularly suited for this, as our abilities for compassionate touching and empathy provide a safe space for students to express themselves.  I was stunned.  While eager questions followed up on my fellow panelist’s talk, asking her to explain how she uses the technique in other classroom contexts (she had explored it to great success, she said, in prisons), the questions that came my way primarily pressed the point of why it is exactly that I do not give ample attention in my syllabus to “the experiences of real women.”  I spent some time reading the huge NWSA program book after my panel was over.  Every mention of “religion” was advertising scholars who were participants in a particular faith community talking descriptively about women in that faith community.  Muslim women convened for a panel discussing the politics of the hijab in various parts of the world.  Jewish women organized to discuss strands of Jewish feminism.  I found a panel on goddess movements and one critiquing the patriarchy of Christian doctrine.  And so on.  In this setting of scholars, “religion” referred to something specific and real—and decidedly experiential.

I realized that I had developed a very different reading of our feminist mainstay “the personal is political” from many of my colleagues working in the discipline.  If what we identify as “the personal” is an invariably political act, then there is no sense privileging this or that experiential claim or participant viewpoint.  Rather, we might more productively set about the business of examining how various—often competing—notions of identity (“the personal”) appear as political claims and contestations.

At the AAR, something interesting happened.  While scholars at times (certainly not always) talked about “religion” in more nuanced ways—at least giving a nod to calling it a category—“women” referred to an exceedingly specific, often biological, phenomenon.  Conversations about “women and religion,” then, took the shape of focusing on descriptive anthropological accounts on this or that group of women in this or that country performing this or that ritual.  The importance or relevance of the topic was taken to be self-evident—such work’s motivation was one of awareness-building and a global humanism cast beneath a tent of well-intended liberalism.  Between sessions, I made a point of talking with various people about the topic of women and religion vis-à-vis pedagogy.  This time, the questions put to me dealt with how to give ample time in the semester to various religious traditions.

Okay, okay, these are just anecdotal gripes about a genre of academic performance wherein we are often trotting out very rough drafts of ideas that haven’t yet been polished, right?  Maybe, but I think the discussions among academics still offer telling moments that we might think about when considering how it is that we go about articulating certain claims to one another.  After all, if Reza Aslan’s few short minutes in an online interview are able to spark such debate, then surely more concentrated and focused speaking moments in academia—like the structured spaces of conferences—might give us a nice case study that can spell out (at least in useful nutshells) the broad trends in studies of religion and identity.  For instance, and perhaps most relevant to the Aslan v. Fox discussion, we might ask why some claims to experiential authority are valued and others criticized.  At a recent regional AAR meeting, our academic panels coincided with a meeting of a group of Christians of some charismatic or evangelical stripe.  Scholars easily poked kind (and occasionally not so kind) fun at the affable group of religious followers (they were our data, after all), only to conduct panels on their own analyses of “authentic” ritual performances or of a “proper” reading of a passage in the Bible.  Strikes me that both groups are simply making competing identity claims using the same logic that supposes a way to access a “true interpretation” of something.  Or, for another example, how is it that we decide when, like Aslan did, to make heavy note of our scholarly credentials and when to distance ourselves as far as possible from the academy?  After all, many engage in the latter when attempting to distinguish the “ivory tower” from the “real world” (and socially conscious Ph.D.s that we are, we certainly don’t want to appear aristocratic!).  In the pages of Method and Theory in the Study of Religion, for example, I recently had a debate with a scholar accusing me of not appreciating what she claimed were the real experiences of folks on the ground.  I’ll repeat: she made this critique of academic navel-gazing in the pages of an academic journal.  How does the irony of our own claims in the contexts we make them so often escape us?

The so-called personal is always political.  It is, indeed, a highly politicized claim to talk about a domain of “the personal” in the first place.  What’s amazing to me is how often it seems like scholars want to be self-referential without being self-reflexive.  We want to lay claim to experiential authority or be detached descriptivists when it suits us, all the while pointing to the “scope of our research” to explain our intellectual projects rather than the politics that motivate our studies.

Among those with similar curiosities and frustrations, I guess I did eventually find a group of people to talk to at the proverbial cocktail party.  It’s just that, instead of huddling in the corner of one of the rooms, they turned out to be standing on the lawn outside, talking about the house.