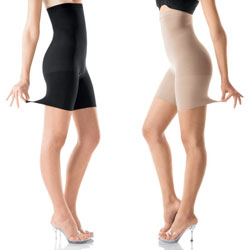 Ever seen those?  Those are Spanx brand undergarments.  I’ll get to them in a minute.

I have just returned from my 20th high school reunion, which, as one might imagine, provides a cornucopia of data on identity.  There were plenty of “Can you believe it’s been twenty years?” comments, the resurrection of lots of insider jokes that were much funnier long ago, and many discussions of spouses, jobs, and kids.  In other words, it was an enjoyable, albeit predictable, time.

Theorists of identity could have a heyday thinking about the multitude of ways that reunions expose the seams of self-portrayal, for this is one of those times when looking and sounding your best is of high priority to many who attend.  But interestingly, it seems to me that reunions (and other important events) run on certain types of deception as much as they do memory.  What goes unspoken, unseen, or unsaid matters, in other words, perhaps just as much as the overt presentation.

For instance, I would likely have been a little put off – or at least felt some pity for – a former classmate who described a highly successful career that he or she didn’t really have.  That sort of deception is often regarded as inappropriate, untruthful, and maybe even a little immoral.  Consider, however, the number of female former classmates who I saw adjusting a multitude of different undergarments that sucked them in just the right amount so that they could wear their special reunion garb — Spanx and Spanx knock-offs abounded, in other words.  Spanx, I am told, through a feat of elastic magnificence, can visually eliminate up to 20 pounds of rolls, bulges, and other protrusions that aren’t considered culturally attractive.  Despite the fact that Spanx create a certain sort of deception, no one questioned the morality of Spanx-wearers for attempting to mislead the rest of us about what time has really done to their bodies.

This pushes the question of which deceptions are rendered “immoral” in identity construction and which ones are not only expected, but praised.  Is this just the difference between a reality that never was and one that we want to be?  Or is it that so many deceptions are just so popular that they are removed from the realm of ethics altogether, and thus become re-categorized as acts of etiquette?

Deception in the name of etiquette is actually a tremendously common practice, the ethical valuations of which vary depending on the social circumstances. The same week as the reunion, I happened to attend two other events that appeared to be much different, but were actually quite similar:  a funeral and a museum tour.  The centerpiece of the funeral – the eulogy – was a brief and overwhelmingly positive description of a life that was undoubtedly more complex; this is, it seems, is the very task of a eulogy.  The museum tour (in this case, of a major international corporation’s memorabilia) did not even mention the decades of financial turmoil that has characterized the company’s slow decline.  Similarly, the reunion highlighted the artificiality of reuniting with your adolescent peer group and pretending, to varying degrees, that nothing has changed.

These are not, however, the things that get said.  While one could chalk this up to accentuating the positive, such omissions strike me as something like the “negative space” that artists often talk about to describe the empty border around an artistically rendered subject; designers use the term similarly to describe walls or rooms that remain relatively unadorned as an aesthetic counterbalance that is often intended to point the eye elsewhere. Just like in the Wizard of Oz, this is the “pay no attention to the man behind the curtain!” line; it is the cultural shift to look elsewhere as the wheels of identity construction are momentarily exposed.  Much like the polite lies that we are taught to utter (“Grandma, I LOVE this fanny pack!”), so do omissions – and the unspoken deceptions that they enable – make the cultural wheel go ‘round.

One Reply to “Now You See It, Now You Don’t: On Deception and Identity”