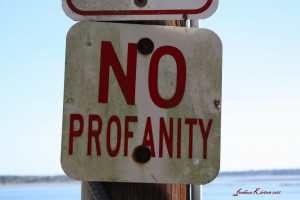 I distinctly remember the day in fifth grade when I was chastised by my peers for not knowing the proper litany of cuss words that, apparently, all fifth graders know. I was the teacher’s pet type who wouldn’t have used those words had I even known them (oh, how things have changed!), but I distinctly remember that my ignorance made me feel babyish and unsophisticated. Of course, I didn’t have the wherewithal at the time to recognize that fifth graders are not usually the standard bearers of maturity and style, but the fact that I could not engage in a secret barter of offensive terms made it clear that my chance at becoming one of the cool kids was being jeopardized by the minute. Another particularly ominous sign came by the sixth grade, the year that I proved that I was inadequately equipped to flip someone off. When I tried, my middle finger simply didn’t look as offensive and foreboding (or, strangely, straight) as the fingers of my peers. In retrospect, only my Reebok high tops saved me.

Today, you’ll be relieved to know that I have mastered almost all forms of offensive speech and gesture and no longer have to rely on my shoes to keep me in the thick of things. But for those of us intrigued with the various ways in which identities are constructed, the issue of cussing – and more generally, that which counts as “offensive” – is an interesting litmus test not on the limits of social acceptability, but on the very fluidity of who and what might be marketed as offensive.

Several times over the last few years, NPR has run some interesting stories on cussing – its significance, a growing cultural acceptance of the practice (particularly in the under 40 crowd), and the evolution of certain words from offensive status to benign, or vice versa. You can read some of those stories here and here. What’s interesting about each of them, to me, is the idea that we need cussing. Not only do offensive terms function as a social bonding mechanism and a pressure-release valve, they note, but they also are important ways that we add emphasis and emotional impact to our communication.

But there seems to be something more interesting about the necessity of cussing buried in the comments to these stories, wherein most of the readers who’ve written in insist that acceptable cussing pivots around timing and style; there is a certain aesthetic to the practice, it seems. To the readers, cussing in public, or in groups where one doesn’t yet know the norms, is a no-no, as is cussing with such great frequency that one can’t control whether or not one does it. These understandings of cussing make it into something like the multi-beamed laser security system that protects some valuable gem featured in almost every spy movie: the expertise doesn’t lie in simply proving that you can get past it, but that you can do it with the panache of an Olympic gymnast. While there are a few folks on the comments portion who insist that only those with inadequate vocabularies resort to cussing, or that cussing is inherently offensive, the majority seem to feel that cussing is absolutely acceptable, if not often desirable, so long as it’s done right.

So when NPR contributor Geoff Nunberg remarks that “profanity makes hypocrites of us all,” there is an ironic edge to the statement, for here we have yet another example in the annals of identity-making of a rule that’s meant to be broken in order to make certain ones of us “acceptable” social actors. In other words, there are multiple social boundaries that we’re often told not to transgress, but we’re absolutely expected, if not encouraged, to put our toes (if not other body parts) across the line. Can you imagine, for instance, a college student who ends his or her four year journey and proudly announces that he/she didn’t drink a single alcoholic beverage? Or an employee who has never – not once – used the internet for personal entertainment while at work?

One way that we could interpret this is to say that moral standards like the kind that influence our speech are in place to create some parameters so that we might playfully challenge authority, but because we censure each other when we do go too far (cussing at church, anyone?), we’re nevertheless recognizing and honoring the boundaries. The ability to distinguish a minor challenge to authority actually works as a major reification of its rules, in other words.

While I think that there’s something to this idea, there is certainly more to the story, for who the “we” is that can transgress the boundaries without penalty is a limited – and privileged – group. In an amazing and well-publicized example of this, consider the account several years ago of two seven-year old Florida boys – one white, one black – who, just days apart, committed the same act: they stole their parents’ cars, and were subsequently caught by the police. The white boy was punished by his parents with a few days of revoked screen privileges, but was otherwise in no legal trouble, and shortly after the act, made it onto the Today show to describe what he did. He was portrayed positively as a kid who learned a valuable lesson, all in a “boys will be boys” manner. The black boy, on the other hand, was nowhere close to receiving a morning show invitation, and, instead, was charged with grand theft by a police force that clearly saw him as a social threat (a “pre-criminal,” one commentator notes), as someone who needed punitive intervention in order to rescue him from his almost certain career criminal path.

This example puts in stunning relief the unspoken aesthetic boundaries that operate regarding the connection between morality and social worth, for in the example of cussing (as with many other transgressions), the issue is often as much about who is doing the cussing as the words and environment in which they’re speaking. As a petite, white, well-educated woman, no matter the torrent of cusswords that I use, the worst that my occasional potty mouth will do to my reputation is render me inappropriate or perhaps unprofessional; at best, I hope I’m hysterically funny. I will never likely be demonized as vulgar, uneducated, or ignorant in the same way that I would if my skin color were darker or my appearance more working class, or if I bore any other sort of physical marker that might pre-contextualize my very existence as pathological.

If those with power and privilege often have significant leeway to transgress boundaries, then perhaps we can see another level of irony in Nunberg’s remark that “You can’t have profanity if there are no prudes left to be shocked by it.” While I agree that identities are always constructed in contrast to things they are not, we must also recognize that, in the game of identity and public morality, some individuals will never have the luxury of being considered one of the “prudes.”

2 Replies to “Out of the Mouths of Sailors: Cussing and the Power of the Selective Double Standard”