Midway through the Sprin 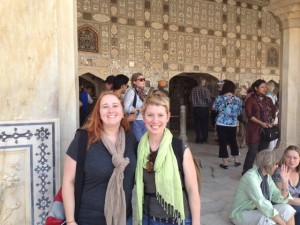 g semester of 2013, Leslie Dorrough Smith (on the right of the photo) accompanied a group of undergraduate students from Avila University to a variety of cities in India, including Delhi, Agra, and Jaipur. The study abroad course in which the students were enrolled focused on issues of social justice. Read a post by Leslie here, discussing how, when some people (e.g., North Americans) travel to such locales, they report witnessing exploitation all around (such as the women Leslie reports who would let tourists hold their children for a picture–but for a fee). “We only see it as exploitation,” Leslie concludes, “because we have the luxury of doing so, to put it simply.”