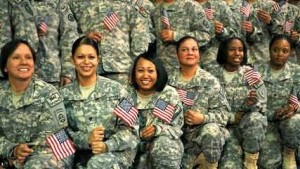 At the small liberal arts university where I work, we offer a travel course entitled “The Rhetoric of War.” The course examines the way that rhetorics (both verbal and graphic) depict war, patriotism, and the nation-state in the American context. Midway through the semester, the class takes a whirlwind trip to Washington D.C. in order to directly engage the ways in which war is memorialized.

My friend and colleague, Dr. Amy Milakovic, is one of the faculty who teaches that course; she has a forthcoming paper about the experience, with particular focus paid to the Women In Military Service For America (WIMSFA) Memorial. As Dr. Milakovic argues, the attempt to honor military women at WIMSFA happens through a narrative that works only to the degree that it actually diminishes women. WIMFSA achieves this by reinforcing traditional gendered stereotypes at the same time that its physical appearance emphasizes invisibility and insignificance, two terrible ironies achieved in a place that claims to highlight and celebrate women in the military.

The history of the memorial, built in 1997, is a telling part of the story. While there were initial arguments against building a memorial to women soldiers altogether (on the grounds that all monuments are already gender-neutral), the construction of the monument eventually went forward on the terms that whatever was built would in no way detract from or overshadow the surrounding monuments, including Arlington National Cemetary, WIMSFA’s nearest neighbor.

Overshadow it did not. The statues, sculptures, and other dramatic emblems that characterize most other monuments were part of the original plan, but were ultimately rejected in favor of something much more diminutive. As Milakovic details, the plans that were finally approved created a monument so low-profiled, inconspicuous, and with such poor signage that many are unaware of its existence. Despite this, various cultural commentators praised the WIMSFA design for its subtlety and relative invisibility, two very interesting things to laud in a war memorial.

Apart from its appearance, the content of the WIMSFA memorial also contributes to a narrative highlighting female difference. The WIMSFA collection is comprised largely of personal trinkets (including, at one point, a teddy bear and pink shovel to celebrate the monument’s groundbreaking), pieces of clothing, dolls, and a large quilt prominently displayed in the memorial’s central exhibit hall. Featured quotes from military women talk about how deeply they miss their children while deployed, along with how difficult it is to deal with menstruation while in the field. After spending four chock-full days visiting virtually every Washington, D.C. monument possible, the students in the course consistently notice that WIMFSA is markedly different. In particular, they frequently recognize that men’s bodies and their role as parents rarely, if ever, are mentioned as defining features in the other memorials they visit.

Perhaps it goes without saying that talking about women through a classically feminized narrative (emphasizing the emotional, mothering, personal, domestic woman) separates WIMSFA from the dominant masculinized narrative of bravery, strength, and sacrifice that characterizes virtually every other war monument in the nation’s capital. In this way, one could argue that WIMSFA and the other monuments act as a foil for one another to render women military members as little more than loveable side-kicks in American history. This is the work of nostalgia, or the selective process by which a more suitable memory is crafted by diminishing unpleasant or otherwise competing narratives.

In thinking about the work of nostalgia, then, we should pay attention just as much to what was left behind on the editing floor as we do to what made the cut. I find the power of nostalgia particularly interesting to consider in a setting that is already painful, for war is a deeply tragic event for almost everyone involved. So how does one make war less painful? The simplest answer, it seems, is that we diminish those whose identities may disturb the nostalgic archetypes of strength and sacrifice that justify war in the first place. In this way, what it seems that WIMSFA highlights — if anything — is the fact that women who act like men constitute an even more painful topic than war itself.