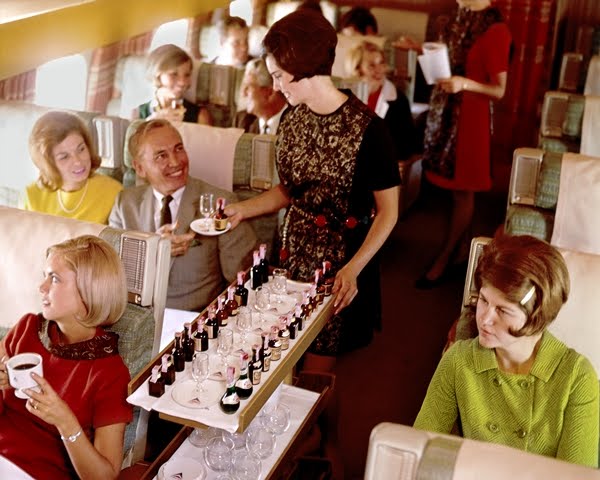 I was up in Chicago the other day and when flying back home on a 9:00 am flight I noticed a woman, seated on a stool at one of those bars located alongside the boarding gate, with a plastic cup with reddish liquid in it and a straw. She’d walked by me, while I was seated at the gate, a few minutes before and stood out for me because, by the look of her face, I judged her probably to be rather younger than she seemed, maybe having lived a hard life, making her 40 or so years look 60 or more. So I guess seeing her seated at the bar, three hours before noon, confirmed a quick judgment I’d already formed based on how she appeared.

She was having a bracer before the flight, no doubt.

One for the road.

It turns out we were both going to the same place, seated across the aisle from each other, with her one row ahead of me on my left. I didn’t think much of it but do recall seeing that plastic cup again, on the tray table once we were on our way, up close this time, with a slice of lime in it.

Bloody Mary, I assume — one part vodka, four parts tomato juice. There wasn’t much of it left.

I started reading the essay I had with me, proofing it, and paid no more attention until her seat mate, who was over at by window and looked in her early 20s, stood up and tried to get out, presumably to use the bathroom, but was halted because Bloody Mary — that’s what I’ll call her, I guess — was asleep on the aisle. We made eye contact, the young woman trying to get out, and I nodded and motioned that she might as well wake her up, seeing as she couldn’t leap over her. So she tapped Mary and, without rising, Mary swiveled into the aisle a bit and the young woman with smooth skin — professional-looking, with glasses, shoulder-length straight hair, and a nice overcoat — awkwardly squeezed out and headed up the aisle. Mary snoozed until she returned and they repeated the exercise so her seatmate could return to the window, where I could see her get out her Mac laptop and work through some emails (the flight had internet service — what a work ethic). Mary, with the wrinkled, weathered complexion and the ice long gone from her drink, dosed on and off and I continued reading.

About an hour into the flight the drink cart came around and, though my view was now somewhat obscured, I noticed the flight attendant getting out one of those small bottles of vodka and a can of tomato juice and, adding ice to a little plastic cup, handing it over.

Mary getting a refill, no doubt.

So you can imagine my surprise — or should I say embarrassment? Maybe regret? — when I realized the flight attendant was instead stretching a little to hand it across Mary to her seatmate, Ms Young Professional working on the computer, who was by now watching golfing videos on YouTube. She produced her credit card, handed it back across Mary, paid for the drink, and Mary got a coffee from the cart. I think it was black. I’m not sure. As the cart then passed us by, Mary retrieved some needlepoint from a bag under the seat in front of her — brightly stylized flowers bursting from a brown tree trunk — and, putting on some reading glasses, she settled into the fine detail of her craft while Ms Young Professional mixed and then drank her 10 am Bloody Mary.

What a curious position to find myself in, I thought — the narrative I’d so quickly crafted was that Mary was sleeping off a few early morning drinks when, in fact, who knows what was in that cup. People can surely drink plain tomato juice with a slice of lime without risking being classed as a drunk, no? In fact, she was pretty good at her needlepoint’s fine work — for I guess I felt like I had to watch a little more closely, maybe looking for the shakes, trying hard to hang onto my by now obviously outrageous narrative. But sitting there working away in her reading glasses, much like I was in my own, told me that my narrative was pretty far off the mark.

What a tremendous lesson in the limits of profiling — how easily we slip into well-worn stories and one-size-fits-all stereotypes, based on the slimmest of details. It’s something that, as a scholar, I know only too well — but it’s also something that I slipped into without giving it a second thought while I was in line waiting to hear my zone called to board the plane.

Come to think of it, I wonder what the guy seated on the aisle, behind and to my left, thought about that guy with the beard and the reading glasses seated on the aisle in the row ahead, steadily peering at those two ladies. I can only imagine the story he has to tell.