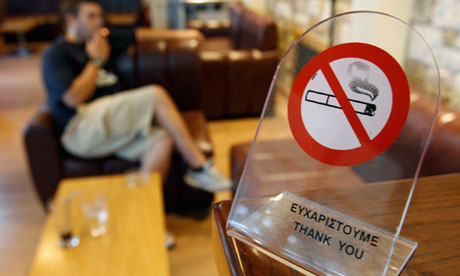 An interesting, though brief, story was on the radio this morning, concerning the September 1, 2010, ban on smoking in enclosed public places in Greece — a ban that I think it fair to say has only gradually gained some traction among the Greek public.

What’s far more interesting, though, than the rate of smoking in this or that EU country is the comment at NPR’s page for the story, a comment that draws our attention to why this is even news.

What is the purpose of reports like this? Is it to inform NPR listeners about how un-enlightened the Greek people can be, in spite of all the “nudging” that governments have done to try to eliminate smoking? Is it to give NPR listeners (who I believe are overwhelmingly non-smokers) a sense of righteousness and make them feel smug about their own situations, or to give them a sense of guilt about the fact that someone, somewhere is not behaving progressively? Maybe NPR wants to use the guilt to motivate listeners to take action to reduce Greek smoking, by traveling to Greece and hectoring Greek smokers on the streets? Or by legislating for the banning of tobacco products in the EU and the US? Or by contributing more money to NPR and other activist nanny organizations to make life harder for smokers to convince them to stop?

My point? The comment makes evident that this item, of all the things that could be reported on today, counts as a news story only in light of unarticulated but widely shared sets of normative assumptions that many listeners likely have about Greece, its ongoing debt troubles, the presumed productivity of its population, their lifestyle, etc. — such as, “Well, if they have money to sit around cafés smoking…?” We see these same assumptions here at home, of course, in commentaries on how people characterized as poor still have enough money to buy what conservative commentators see as nonessential luxury items — suggesting that, if I’m correct hearing this in their report on Greece, NPR’s reputation for being a liberal media source might not be all that accurate.

A more interesting news story, one of wide relevance to almost all listeners, would revolve around not that people smoke but why people smoke — or eat fast food or drink sugary sodas or eat deep fried snacks or drive too fast or drink too much alcohol or…, I think you get my point — and what it has to do with, say, widespread social anxiety and personal stress. For of all times this might be the absolute worst to try to ban something like smoking.

We have long known, of course, that reports such as NPR’s tell us far more about ourselves than they do anyone else, and that such characterizations of “them” are but a means to make us, when compared to those other people, into a certain sort of “us.” So, much identification is taking place in this one 3:28 report from Greece — not about Greece, of course, but about us instead.