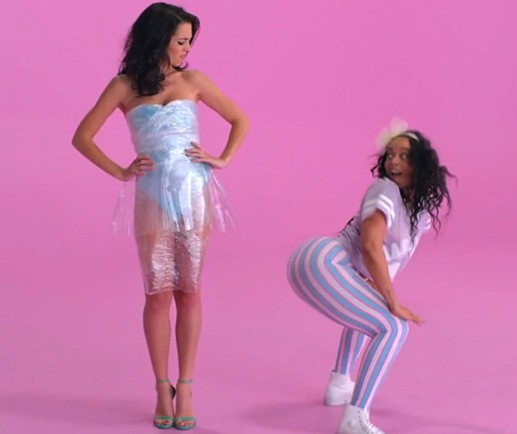 Well, how to post in the wake of Monica Miller’s post yesterday on Kim K’s derriere? That’s the question. I’ve decided to meet that challenge head on with, yes, a little more booty — to quote a line from the Meghan Trainor‘s number 1 hit, “All About that Bass.”

What’s interesting about this song to me is the way that the seemingly progressive lyrics — in which body size is front and center, along with now popular critiques of Photoshopping images of women in magazines, etc. — are lodged within a curiously traditional gender model, one in which:

my momma she told me don’t worry about your size
She says, boys they like a little more booty to hold at night

It’s not really so radical, if you think about it (maybe that’s why it’s a hit?), for it isn’t difficult to find popular culture images of women defined in terms of their sexual appeal to heterosexual males.

So I guess what sets this song and its video apart is its ambition to include previously excluded women in the big tent of this rather conservative and, in the eyes of some, restrictive gender ideology.

Tights manufacturers will now have a whole new market of buyers.

So it turns out that it is indeed all about that base — not big bottoms but big bottom lines, i.e., it’s all about economics, playing it safe by using radical wrapping on a familiar, market-tested message that will bring new buyers to what they’ve long been selling us.

But I can shake it, shake it,
like I’m supposed to do…