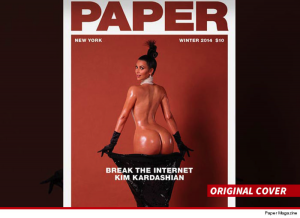 As I’m sure we’ve all heard by now, Kim Kardashian’s backside, displayed for the world’s consumption and viewing pleasure (or not) on the front cover of Paper Magazine, “broke the Internet” just a short while ago and has since caused a flurry of debate, shock, praise, and disbelief. Add to that a big-booty praise of “#allday” from her beloved husband, Kanye West which received thousands of Retweets. I’ll leave it for those entering into the debate with interests and intentions of conflict management and moral maintenance to weigh in on what Kim’s big ‘ole butt plastered on the Internet for the world to view and deconstruct means for progress, freedom, justice, feminism, America, motherhood, identity politics, women, sexuality, Kanye, blackness, and much, much more. Amazing how a bare ass on a magazine can speak to and says something about such a *****wide***** variety of topics!
Something more interesting — and fascinating (in my opinion) has caught my attention about the unfolding conversation and ensuing public debate and discourse — that has seemingly little to do with the perceived “object” of study here. I’m more curious about how all of these emerging grand claims to truth (seen in what follows below) sparked by Kim K’s naked badonkadonk are helping it to break the Internet and make possible the Sui Generis booty she (and the world) thinks is so NOT-unique, or, not unique enough to warrant all of the hype. One is not born a big booty, rather, one becomes a big booty, so it seems. We have manufactured the Kardashian booty that we so love to hate and hate to love.

A consideration of the social and rhetorical techniques making possible a wide variety of opinions, contestations, debates and twitter wars nicely highlights and sums up how identities are made, waged, and shaped in and through operational acts of identification. What follows is a brief exploration of the rhetorical tactics and strategies making talk of and claims to identity and identities possible in Bootygate ’14.

So… with that in mind, take a look, and decide for yourself if the debate is really about Kardashian’s booty, as such, or rather, more mundane public, social and cultural interests, affinities, and stakes — contested at the manufactured site and superstructure of Kardashian’s behind and most coveted asset — where all of the world’s struggle for and over meaning are taking place and being worked out in the cracks (no pun intended) of our fragmented cultural imaginings.

Let’s have a look: 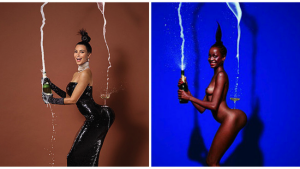 Origins – “The “Blackside” of History”

One butt’s history fits all? What do we make of historical contingency and transhistorical claims at work here? But, that’s not all to the story… here’s a different angle. Not only does Kim’s butt signify something of the “backside” of history (of a particular group), but holding universal claims to history at bay, the stunt wasn’t even original (which would, I’m assuming, change the rules of the debate?):

“First off, those of you declaring that these pictures are ‘history-making’ need to chill out. There is nothing new or even original about this spread. Renowned French photographer Jean-Paul Goude just dug into his archives, pulled out some of his old favorites and recreated them with reality TV’s reigning It Girl.”

In case you were wondering, “Kim Kardashian herself hasn’t addressed the Paper Magazine photo controversy, especially the supposedly racist origins of the shot.” Authenticity – “What’s Really Real and Why it Matters”

Authentic fakes? Don’t worry too much, for we now know that a little bit of page-proofing and line editing occurred in the final production stage of the book, err magazine cover – co-founder and editor of Paper magazine made the **big** reveal in this way:

“Kim Hastreiter, co-founder and editor of Paper, has finally revealed: ‘Of course it was Photoshopped. Do you really think that you can open a bottle of champagne and get it to spray in a thin line over someone’s head and land perfectly in a glass sitting on that same person’s bottom.'”

In search of the “really real copy” of Kardashian’s butt, the one before the authentic fake emerged:

“Of course, we’re still keen to get to the bottom of her belfie [a bottom selfie], so it’s hardly surprising that ‘untouched’ versions of it have appeared online.”

But now, we have conflicting reports in the largest search of the original since the quest for the historical Jesus:

“And although some are convinced the 34-year-old’s body HAS been edited for the shoot, TMZ are claiming the ‘untouched’ version of the pics are fake.”

Then, from on high, we are given a good lesson in social theory from the manufacturer : “#KimKardashian is disgusting. She is a mother now. Her first thought should be how is what I am about to do going to affect my child”

Forget the “b(l)ackside” of history, some other groups have rushed to challenge such maternally situated claims like the one above by strategically deconstructing the “slut-shaming-isn’t-she-a mom?!” argument to suggest that moms (rather than all women) also deserve to be sexy. Interestingly enough – some of those using such logic of critique aren’t really praising Kim’s cover, rather, they just want the world to know that the politics of respectability arguments using motherhood as a straw man don’t hold. That is – forget that her photo might visually perpetuate a pernicious racialized trope and history according to one group, another group, taking motherhood as their salient identity and point of departure, have come to defend Kim around the rally-cry that “moms can be sexy too!” and that we, the public need to stop “slut-shaming Kim K” in this way. So, if she wasn’t a mom, perhaps the argument here too, changes, on both ends? Back to racialized difference and the blackside of history – some others on Twitter want to know why Beyoncé’s booty is more often than not beyond reproach:

“How come Beyonce (a mother) can dress like a slut and we think the highest of her, but any other artist does it and they’re vilified?” 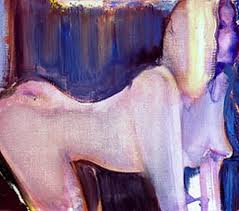 “But if you do feel compelled to comment on a stranger’s derrière, at least go to a museum and give yourself a dose of culture while you’re at it.“

So, it’s not bare butt that counts, it’s where such butt is displayed? Sounds like someone is playing “Accidental Favorites” (see The Edge’s Steven Ramey’s Afterword in one of our forthcoming volumes) here!

So, what’s the takeaway here? Is it about a “right” and “wrong” way to display a butt on a magazine and who gets to decide? What’s at stake in such claims and for whom? What does Kim’s glistening photo-shopped, curvy, internet-breaking-backside signify about all women’s butts? We’ll keep you posted if and when the quest for Kim K’s sui generis backside uncovers something unique – if it does – we just might have to rethink what we do here at Culture on the Edge – in the meantime, check out our series and forthcoming titles (here and here) that might not break the internet upon publication, but… they for sure provide brilliant jewels in how to study what breaks the internet and why.

One Reply to “Manufacturing Booty: On How We Stake Our Claims”