In fact, rather ironically, use of the very word terrorism to name just some violence could constitute but one instance of what we commonly take terrorism to be, for choices of what to call terrorism could be read as having the effect of intimidating a population in service of the interests that motivate (and benefit from) that very choice.

So given these sorts of critiques of the category, I find interesting how the left is now quite interested not in abolishing it but, instead, in extending the use of the category. For now it’s not difficult to find commentaries online and in print media questioning why certain crimes are not classed as terrorism, such as this past week’s horrific murder of nine African-American parishioners in Charleston, SC, by a white gunman — a classificatory debate that has had significant fuel added to it once the confessed gunman’s online writings surfaced a few days after his arrest, making apparent that this was no random act.

So here’s my question: is this interest on the left with the category terrorism simply a strategic move to mobilize all the federal government resources that are dedicated to fighting anything labeled terror, and redirect them toward fighting, for instance, racism or misogyny — a tactical attempt to shift the conversation away from violence some seemingly mysterious “they” commit to addressing the routine violence we see here at home, practiced by us on us — or is it a sign of the victory of the discourse on terror, that we no longer see the category as empty and, instead, see it as a substantive designator that we now wish to use in more and more cases? 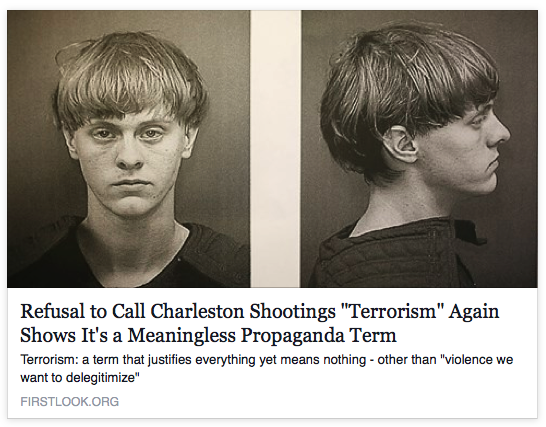