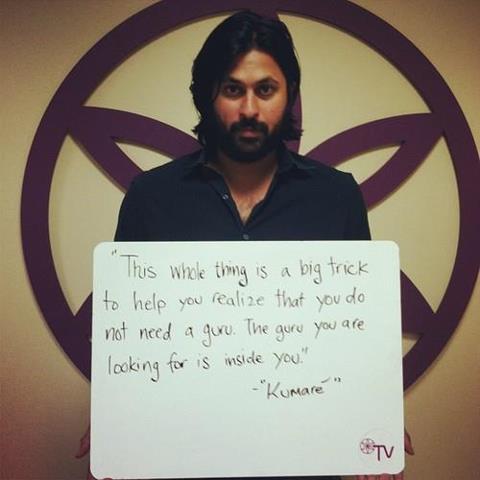 This morning on the radio I heard a story, rebroadcast from September 2012, on the recent film “Kumare,” described on its website as “a feature documentary film about the time filmmaker Vikram Gandhi impersonated a fake guru and built a following of real people.” The interviewer on the radio program — Maureen Fiedler, host of “Interfaith Voices,” a program predictably about inter-religious dialogue and mutual understanding — asked the director/star a final question:

Q: What does your experiment ultimately say about the authenticity of religions or religious leaders?

A: I mean what I hope it says is that it’s time we grew up a little bit, and, ah, stop looking for what I consider magic, the idea of something supernatural or beyond this world being the answer to our world. The world is getting smaller and the Himalayas where Kumare was, you know, supposedly from, are not so far as they used to be. And, ah, there are real problems happening in whatever that place Alikash would have been and I don’t think that we’re going to solve them if we keep going after, um, fictions. So “Kumare” was, to me, a reality check.

Immediately following this segment on a movie not so different from “Marjoe” (1972), the show then played the final segment in its series “Modern-Day Mystics,” by the show’s associate producer, Tali Singer, in which a woman with an Indian-English accent not so different from the fake guru in the previous story discussed faith healing via yoga and then a man invoked Rudolf Otto’s “mysterium tremendum” to characterize a Peruvian shamanic ceremony whose effects he says were — despite quoting Otto to describe it — beyond words.

This was either an ironic programing choice or the ultimate example of limitless, no-cost liberal inclusion, inasmuch as the second story was unwitting grist for the critical mill of the first.

You can find both stories here.