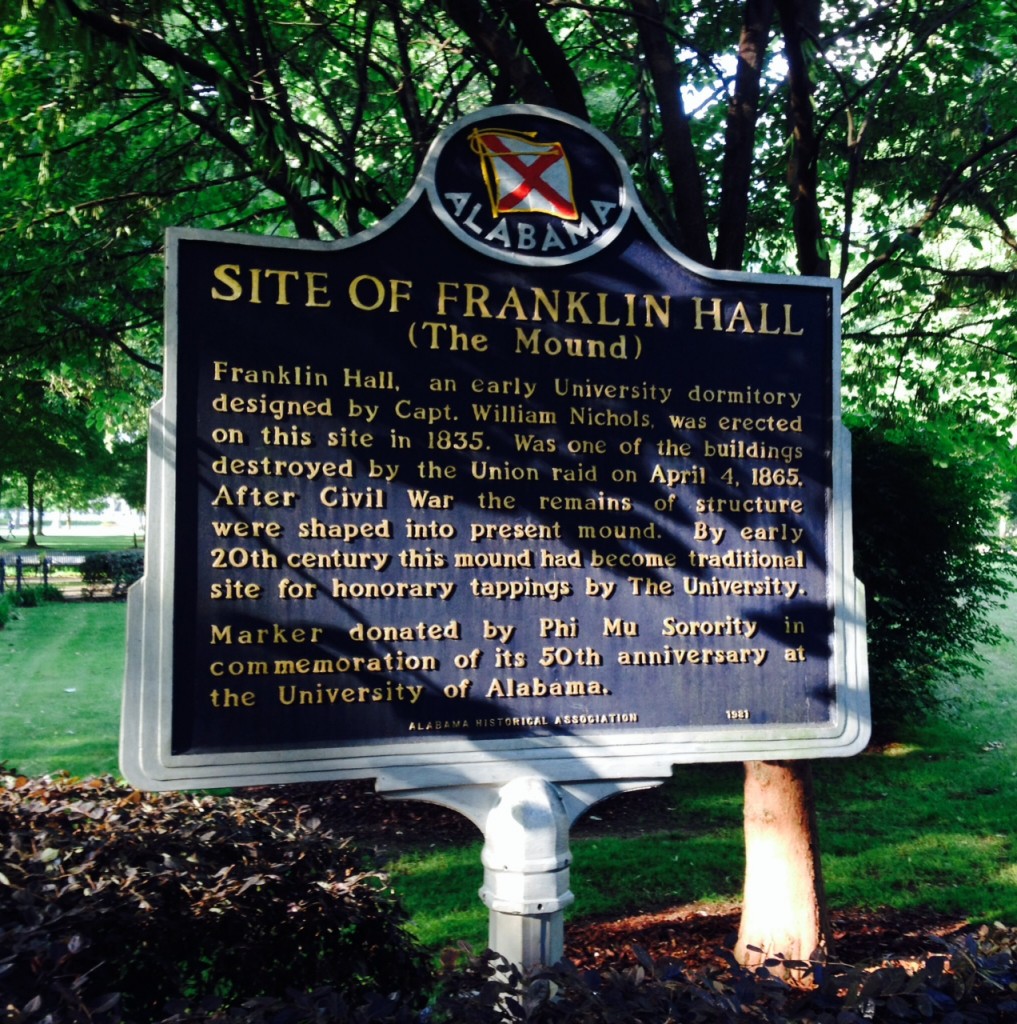 We’ve got a well-known sacred spot at the University of Alabama. No, not our famed football stadium but, instead, where relics are buried from an earlier version of campus, the time of origins when the ancestors walked the earth — back when it was burned down by Union troops coming through Tuscaloosa, on April 4, 1865, within just days of the Confederacy’s famed General Robert E. Lee’s surrender to the Union’s equally famed General Ulysses S. Grant, at the Appomattox county court house, in central Virgina.

Having been in Tuscaloosa when a tornado hit on April 27, 2011, I can imagine what the desolated campus might have looked like the day after (but let’s never forget that it’s purely in my imagination, right?). But, as the historic marker above puts it, it took forty or fifty years for the pile of collected debris, where Franklin Hall once stood (a dorm — its steps are still there), to start to be used for a new purpose. For now it’s where annual ceremonies take place each Spring, initiating new members into various honor societies. 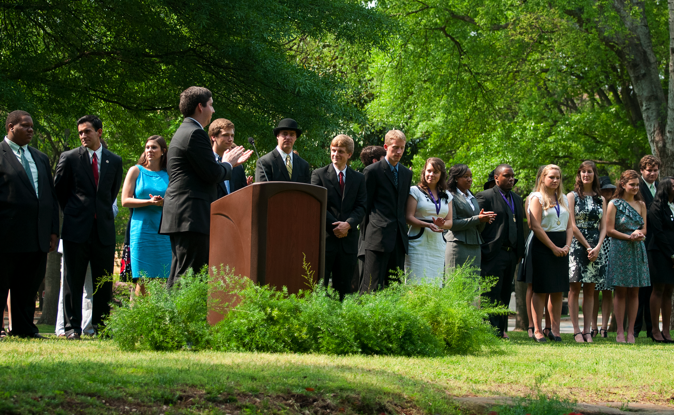 Much as you’d expect — as reported by the now retired Art History professor, Robert Mellown, in an article from the Crimson White, our student newspaper, back in 2011 — there were mounds of debris all over campus after that fire, and only over time were they leveled, to be replaced by new construction or landscaping. But one was retained.

As reported in the article, 22 years after the fire:

[t]he rubble was formed into our Mound’s earthen shape in 1887, when the University began to move out of the Reconstruction era and erected new, Victorian buildings. The Crimson White dubbed them “Mounds of Beauty.”

As the campus expanded in 1900, it began to level the mounds, but the Law School staged a rally with students, faculty, and alumnus. By 1910, our little dirt pile had changed from a reminder of destruction to an icon of the University’s history.

This is a nice illustration of a simple point Emile Durkheim made just over 100 years ago, a point updated by Jean-Francois Bayart when he drew attention to what we call identity as being the product of prior identification practices — practices that are all but invisible to us, or forgotten by us, when we take those qualities they enable (i.e., identities) for granted as real, self-evident sentiments that we merely express. For here we see a fifty or so year period in which circumstances and self-understandings are undoubtedly changing and, along with them, changing practices that result in people making use of available materials for new social purposes. These practices and choices, in which otherwise mundane items are resignified — are the ways in which this one “little dirt pile” becomes a cherished icon while another is just debris cleared away to make room for a new building.

For consider the no less old things that were recently unearthed while workers were digging outside our building (Manly Hall, built in 1885), when they were putting in new water lines for sprinklers and sewers this past semester. While pulling up weathered bricks from under what was merely green grass might provide a compelling invitation for an archeologist if they had been digging on the mound (in which case their excavation would have been called “a dig”), outside our building it was just the inevitable debris that comes when you’re putting in new water lines. No one took any of it to a museum; they just reused it to fill in the trench when they were done.

My point: everything is old when you dig down beneath the topsoil, but only some of it is marked as old, only some is set apart and forbidden.

It’s a simple point, really, but the practices we use to signify this and not that usually work so well that we can’t take our eyes off the historical artifacts, seeing them as if they are inherently different from a world of equally old things; we therefore fail to see the choices and actions that made (and continually remake) just some of it worth looking at and valuing, and all the rest of it disposable. But if we take scholars like Durkheim and Bayart seriously, then our eyes really ought to be drawn to the techniques that we continually use to set things apart, to make (and maintain) difference and consequence where there might otherwise be mundane homogeneity and inconsequence — the practices whereby we classify, distinguish, and rank, always mindful of the decorative chain border that marks off this particular pile of disorganized debris as The Mound. 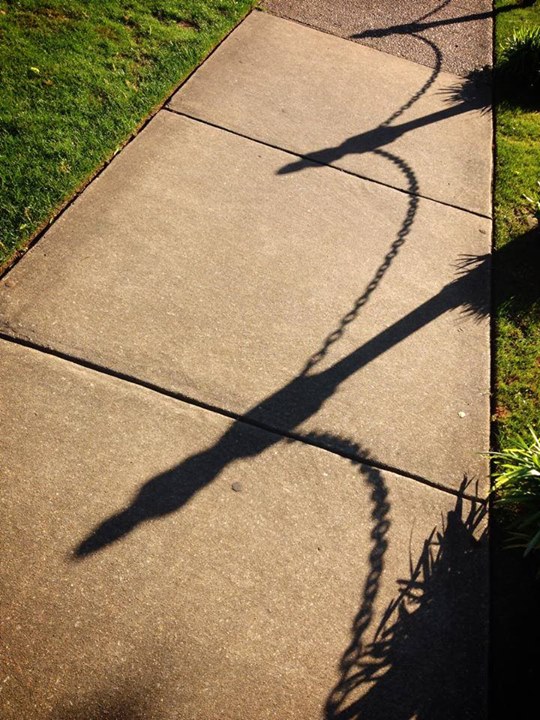