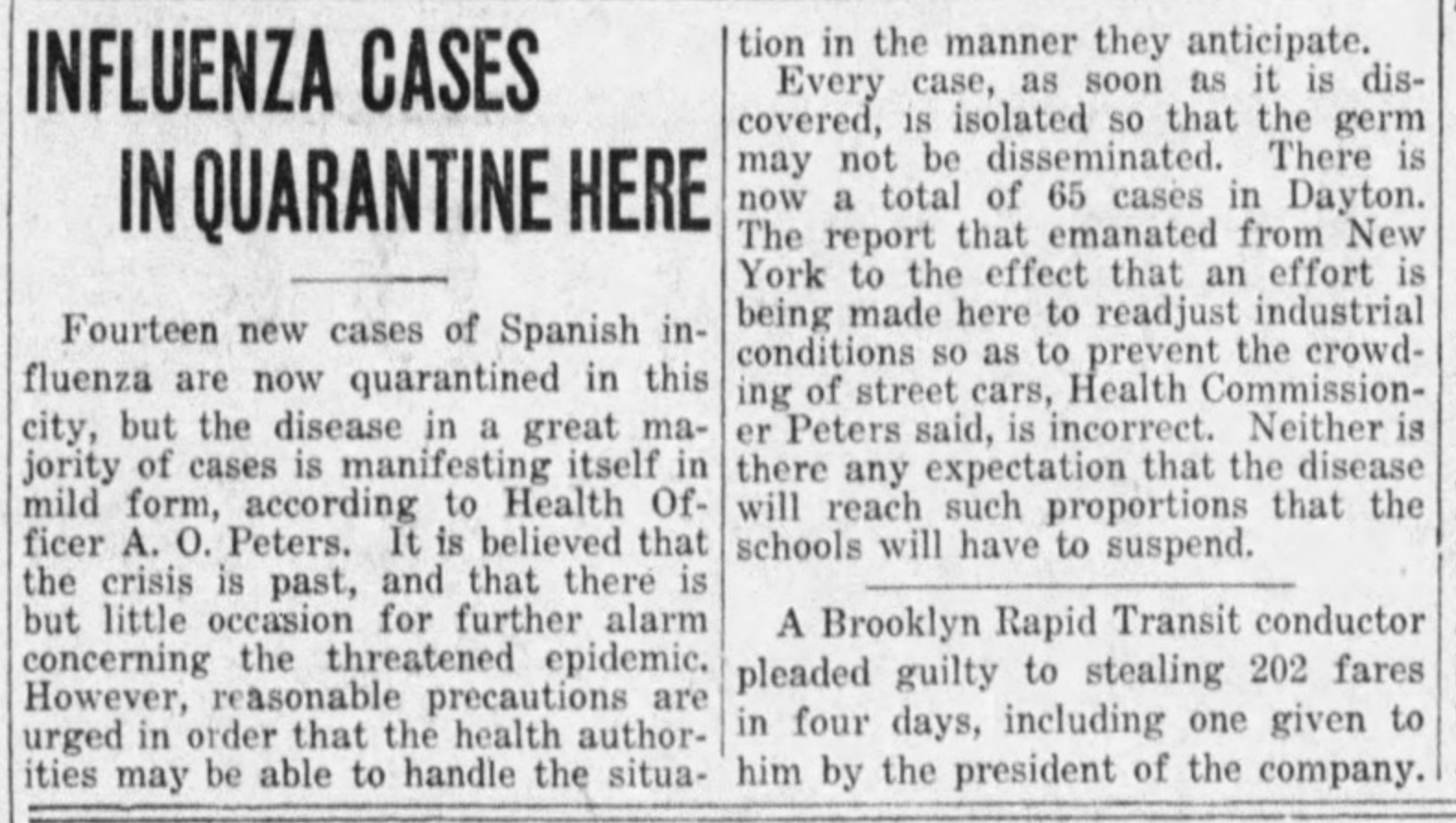 Ever since the COVID-19 virus hit the news there’s been debates over what to call it. (COVID-19 just means Coronavirus Disease 2019, by the way.) We don’t have to go so far as to cite the current US administration’s habit of sometimes naming it as “the Chinese virus” (see this commentary or maybe this post on our site) but can simply focus on what’s at stake in calling it “the flu.”

For, depending on what one means by this, the designation “flu” can convey dramatically different implications — making all too apparent something investigated regularly on this blog: classification matters.

Though some today likely don’t realize it, “flu” is an abbreviation for “influenza,” a term adopted a couple centuries ago throughout Europe, from Italian and, even earlier, Latin, sharing common roots to our modern English word “influence.” (Both, by the way, derive from late Medieval astronomical terminology, for a power once thought to flow from various astral bodies, like stars, and which was thought to affect things here — like people getting sick, perhaps.)

But since those early years the treatment for this once terribly deadly disease (such as modern vaccines and antiviral medications) has become so widespread that, in common talk, “flu” has become virtually synonymous with what one might call a particularly nasty seasonal cold–with versions of the flu associated with head & chest as opposed to those that come with gastrointestinal symptoms.

“I think I had the flu last weekend” we might hear someone at work say, without ever assuming that their life might have been at risk.

It was just the flu, after all.

But for yet others — and perhaps these are the people who retain a firmer linkage between our modern shorthand and the earlier “influenza” — the word “flu” signifies an always dangerous viral infection that, thankfully, has been largely controlled, despite still leading to the deaths of large numbers of people annually and worldwide. For such a person, the so-called Spanish Flu pandemic of 1918-19 might easily come to mind as an example of what such a virus can (still) do, without proper treatment, that is. For, according to the US’s Centers for Disease Control and Prevention (CDC):

The 1918 influenza pandemic was the most severe pandemic in recent history…. It is estimated that about 500 million people or one-third of the world’s population became infected with this virus. The number of deaths was estimated to be at least 50 million worldwide with about 675,000 occurring in the United States.

So…, to return to the comparison that we’ve heard plenty of people making: when you hear someone say “COVID-19 is just like the flu,” what do they mean by that…? Or, better yet, how about what I heard in a recent meeting: that it was like the flu but with no vaccine or treatment…?

Is that assessment alarming or reassuring…?

Well, it seems to me that, all depending on what one means by “the flu,” this comparison of two viral diseases can go in dramatically different directions: one to minimize it and its effects and the other to take it as a dramatic threat.

For instance, with what we might also just call the seasonal flu in mind, the CDC states the following for the US:

CDC estimates that the burden of illness during the 2018–2019 season included an estimated 35.5 million people getting sick with influenza, 16.5 million people going to a health care provider for their illness, 490,600 hospitalizations, and 34,200 deaths from influenza.

That’s just over an annual 0.1% death rate, when judged against 2019’s population (just over 328 million in the US). Compare that to the above US numbers for 1918’s pandemic and the seasonal flu now seems pretty manageable (despite the still sad number of annual deaths, of course). If COVID-19 is just like that flu, then it’s not such a big deal, right?

But what about comparing those seasonal flu numbers to COVID-19’s effects…? At the time of writing this, the following graph represents the US deaths so far from COVID-19 — and remember, it’s for just over a 60 day period and not a whole year (as compared here to Europe, which is a little ahead of the US on the infection timeline): 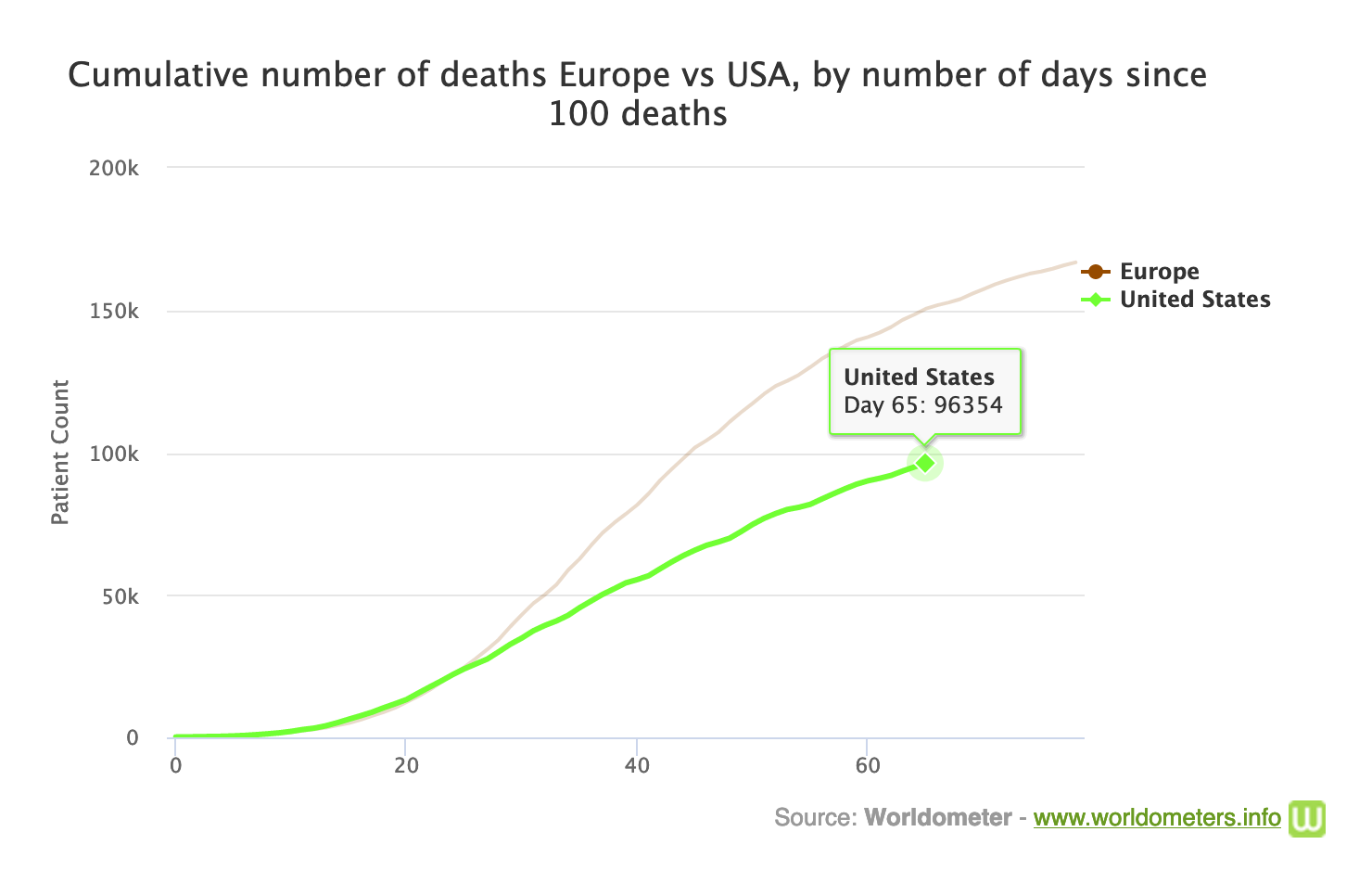 So, if COVID-19 is “just like the flu,” and if by “the flu” you now mean the untreatable 1918 pandemic, then lacking the stringent social distancing measures taken across the country over the past ten weeks, the current number of deaths in the US (96,354 when this was first written — again, for over just a couple months) not only almost triples an entire year’s seasonal flu deaths but, lacking the protective measures that we’ve all put in place these past 10 weeks (masks, social distance, staying home if possible, etc.), it surely would have been dramatically higher. (Did you see the recent reports of a study from Columbia University saying 36,000 fewer deaths would have resulted had quarantining begun nation-wide just a week earlier?) For we once again have on our hands a highly contagious virus with no vaccine and no effective treatment — at least not yet.

Like someone said at that meeting: “it’s like the flu but with no vaccine or treatment.” Indeed — deadly and dangerous.

But…, if by “the flu” we mean that thing some of us say laid us low for a weekend — you know, the common, or popular use of the term, the one that takes for granted the controls we now have in place to keep the numbers low — then it’s likely not something that we’d ever think worth grounding the economy over.

So the question is, in making the comparison between COVID-19 and the flu, what do you mean by “the flu”?