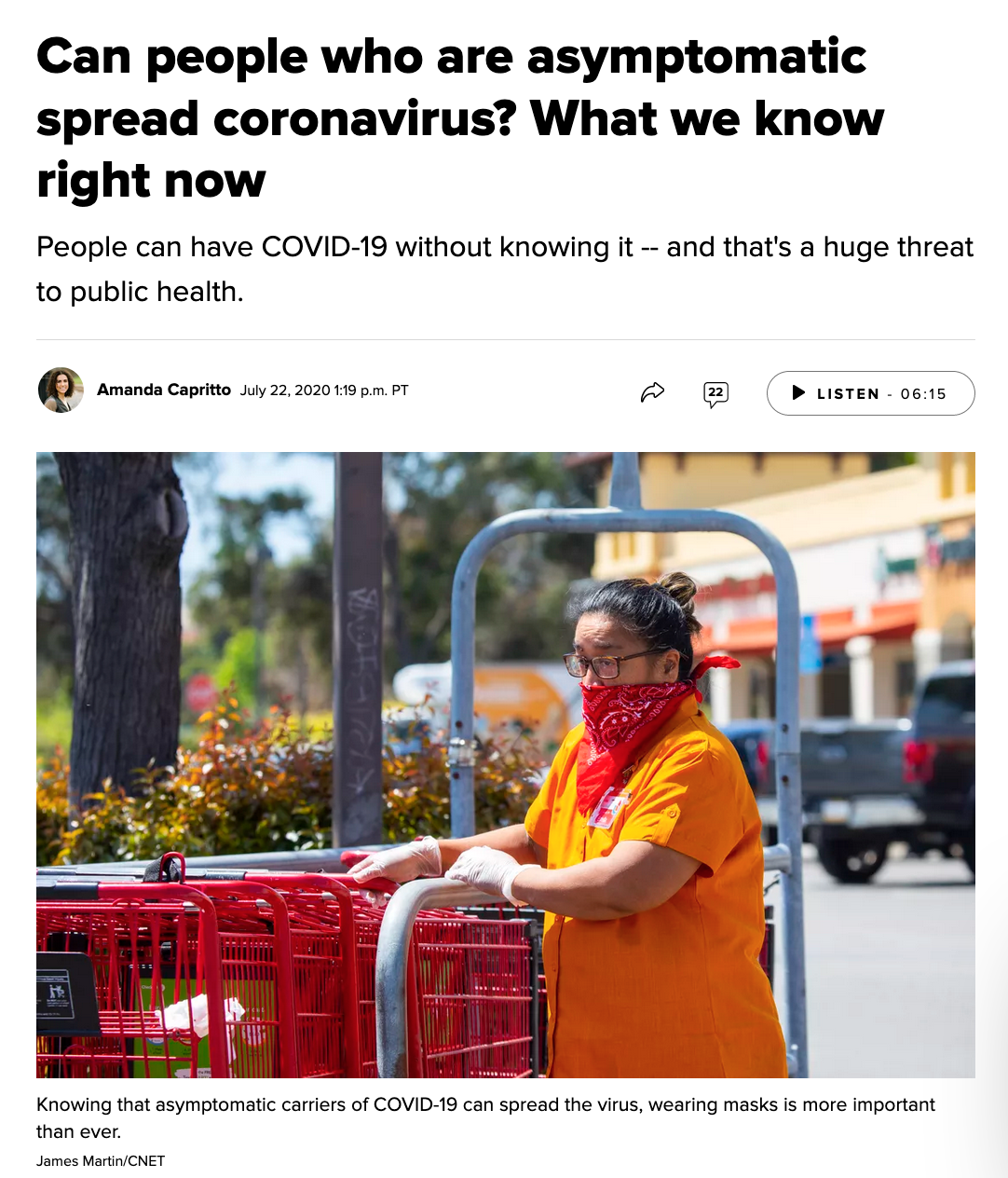 One of the curves thrown at us by COVID-19 is that there’s a large number of asymptomatic people out there, infecting others but with no sign of infection themselves (which is among the reasons why taking people’s temperatures before admitting them to a venue strikes some as mere theater). The challenge presented by asymptomatic carriers is that the signs have all been removed; since tests take time, are still not widely available in the U.S., and none of us can just look at each other and see the virus, we have to rely on visible indications of its hidden presence — knowing that their absence really might not tell us all that much.

This asymptomatic curve, I think, helps us to understand why so many seem to doubt its existence or at least the virus’s virulence (“it’s just like the flu” some still say); after all, lacking symptoms suggests to the empiricist lurking within us that there’s no there there.

We come by this posture honestly, I think, since there’s good reason to conclude that we’re a culture largely focused on symptoms — think of our political process, for example, where addressing the causes of some social ill is often not high on a politician’s to-do list because, at least for many, the structure within which they work is geared toward the election timetable, such that tackling issues that require long-term action falls outside their concern. If, for instance, you’re running for President, then your team likely starts thinking in units of 4: what can be accomplished in 4 years to warrant a successful re-election campaign for 4 more? And in those second four, what can be done to secure your Vice President’s inevitable run? And so, voila, they proudly report a rise in arrests and ignore tackling the far more complicated causes of crime (let alone the reasons for criminalizing just this and not that sort of behavior). The former can happen relatively quickly, but the latter…? That’ll take decades and, like it or not, decades don’t get you re-elected.

It makes me think of a host of products in the marketplace that address the symptoms but steer wide of their causes.

Figuring out the source of that damp smell (Is there a leak? Water in the basement? Need to fix the sump pump or install a better dehumidifying system in the house?) and then addressing it will cost way too much money and take time. So…, you guessed it: we address the symptom — take it from the real estate agent who’s trying to just move houses on the market. Come to think of it, I’m surprised that she also didn’t suggest baking bread right before showing the house.

Or, thinking of some other commercials, why wouldn’t we just spray an air freshener while leaving the clothes hamper full of dirty socks?

It makes me wonder what we’d do if there was, to coin a term, asymptomatic stink in the house — you know, a dampness that no one could smell, such as that leaky drip pan beneath our ground floor furnace that once allowed the accumulated condensation to get all under the floor boards, without us ever knowing it, at least not until yet other, longer term symptoms showed (like the wood buckling). By then, it was a far bigger problem….

So sure, take people’s temperatures and quiz them in detail about their symptoms — “Loss of smell or taste…?” But, with asymptomatic carriers on the scene, I’m not sure that’s all that helpful a strategy for those who risk much if they contract COVID-19, what with the World Health Organization estimating that about 80% of infections are mild or, yes, asymptomatic. For, much like that kid’s room, just dealing with the symptoms isn’t going to be all that helpful this time.