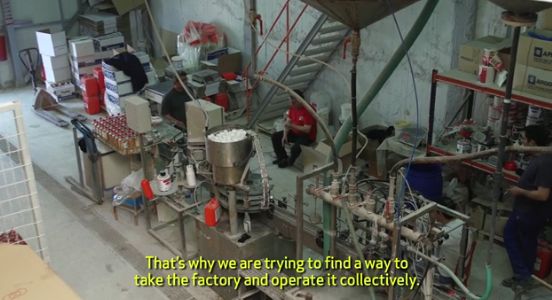 Have you heard about factories in various parts of the world that have gone bankrupt but been taken over by the workers? Consider the case of the Vio.Me. factory in Thessaloniki, in northern Greece, which used to make ceramic tiles but now, after the workers took control of the bankrupt facility, it produces fabric softener. Learn more here.

As quoted in a U.S. news story on the factory, Dimitris Mokas, a worker, says:

“I was driving a forklift and now I’m an accountant … a supplier, driver, anything you want”…

Those of us working on the history and politics of the category religion — or any other identity marker, for that matter — could use this one quote to help others better understand our interests. For in the case of the factory (or any small business, such as the gas station my own parents owned and operated when I was a boy, with no employees but them — and, eventually, myself), it is apparent that the compartmentalization of labor that many of us take for granted — in which things are classified into distinguishable tasks, training, and thus people into specialties who have things called careers — is no longer a luxury that (quite literally) can be afforded. Instead, workers adopt ad hoc roles as tasks present themselves, moving from one to another and likely identifying with none.

So too, we could imagine the taken-for-granted classifications of our daily life (e.g., this is political, that is religious, this other thing is economic, etc.) as institutionalized divisions of social and intellectual labor specific to, and thus in support of, certain forms of life and ways of organizing ourselves. The very ability to think and act this or that behavior into being “accountancy” or “religious” can thus become the object of study, along with the practical implications of such classificatory acts.

Moving from the factory or gas station to social life in general is an analogical move, of course, but perhaps it can be productive of thought; what material and historical conditions are necessary to develop and police the various taxons within which we move and claim identification? What happens when those conditions change? How do we think and act ourselves into new identities? And is it possible to historicize the very category religion itself and people’s ability to call themselves spiritual, religious, holy, as if that somehow distinguished them in some definitive manner from others?

Dimitris Mokas at Vio.Me suggests that it is.