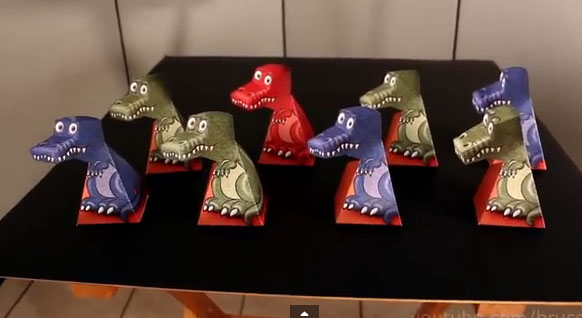 Have you seen this really cool optical illusion now making its way around the internet?

What’s so fascinating about it is even when you know how it’s done — as you will by the end of the video — you still can’t help but “see” the paper dinosaur turning its head and following you wherever you go. The optical illusion works that well (that is to say, our brains work that curiously). Even after knowing the trick we can’t help but play along.

I find critiques of the category religion to be much the same. The category — in concert with a host of other markers, such as choice, freedom, experience, belief, privacy, individual, etc. — works so well that even when we’re trying to study it as a taxon, as a socio-political technique that names, organizes, and thereby makes sense of our world, we still, unthinkingly, default back to it and use it as if it names empirical realities staring us in the eyes. For we critique the notion of world religions but still end up talking about Judaism and Shinto in the same sentence, as if they’re obviously members of the same family. Or we move away from talking about Buddhism and instead rename it the Buddhist worldview or the Buddhist tradition, as if a change of name for the same old things, or a move from nouns to adjectives, suffices.

That many of us — despite our best efforts — can’t seriously rethink the category tells us something, I think, about how well it works (that is to say, how curiously our social groups work).