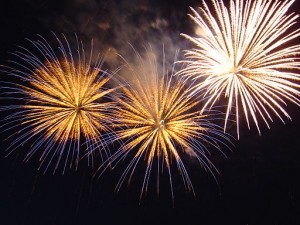 Recognizing the variety of calendars around the world, and thus the different occasions for marking a new year, illustrates the arbitrariness of time and our systems of marking time, which Russell McCutcheon has highlighted recently (here and here). In the context of South Asia, for example, many communities have new year commemorations at different times, primarily based on regional calendars.

Despite the arbitrary nature of any of these calendars, the systems of delineating time can be quite consequential. Most of us remember the Y2K fears in the lead up to marking the (arbitrary) start of the (arbitrary) year 2000. The concern over the impact of the shift from 99 to 00 in computer programs that recorded the year as two digits generated lots of work for computer programmers, to the tune of hundreds of billions of dollars in some estimations. Although people debate whether the fixes were necessary, the concern over Y2K was global, as the Gregorian calendar has become the dominant system, both reflecting and reinforcing power differentials throughout the world.

The occasion of New Years provides an opportunity, though, for some to contest that dominance. The Forum for Hindu Awakening, for example, bemoans the arbitrariness of January 1, arguing that the true New Year is the date on which the universe was created. The Earth’s birthdate, based on calendrical calculations related to a passage from the Chandogya Upanishad, falls on the first day after the new moon in the month of Chaitra (which occurs in Spring in the Northern Hemisphere). The Forum reinforces the relevance of their New Year by referencing the environmental changes that coincide with it (occurring around the Vernal Equinox) and the spiritual benefits of celebrating then. Thus, the Forum calls on Hindus to celebrate the right New Year on the first new moon in Chaitra, emphasizing a normative conception of what it means to identify as Hindu (despite the diversity among those who identify as Hindu) by contrasting the right New Year with the imitation of the Gregorian calendar and the “degradation” that it represents.

Contesting systems for marking time becomes an opportunity to contest other aspects of social systems and power structures.

[Photo by Ondrejk (Own work) [Public domain], via Wikimedia Commons]