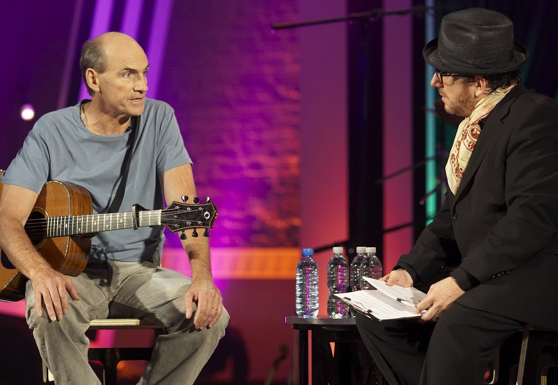 James Taylor: I think that that’s a very good way of describing it. It’s the sort of context of my longing, yeah.

Elvis: You have to connect to the rest of the family, surely, to be a complete writer.

James: Yeah, I think so, I mean, I think that we are experiments in individuated consciousness and I think that we…, we assemble the world inside our heads and that removes us from it. We don’t live in it; we live in our representation of it — our sort of secondhand, second generation construction of what the world is. One of the things that music offers is that it gives you little mythical pieces with which to assemble your idea of what the world is; so…, again, it sort of represents you in the world…. I mean, language, for instance, language is…, there’s only one word that is the actual thing that it describes, which is the word “word.” Word is a word. But everything else is a…, is something that stands for other things. And we think in language… So we live in a representative context. We live in a…, we live separated from the reality that we really live in. People are always looking to get back, they strive for oneness…, and that’s because only we can get lost…. I mean, maybe there are other animals that can get lost a little bit, maybe a dolphin can get lost, but It seems to me as though only humans can really get lost.

Watch that portion of the show: