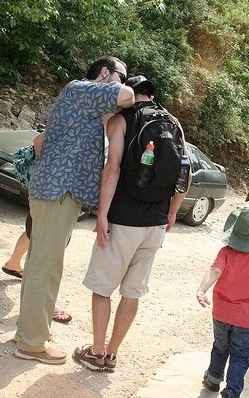 On the way back from walking my dog this morning I caught the end of a radio story on the new documentary, “Open Secret”, which premiers tonight on Al Jazeera America. Seen the trailer?

Everyone but him seems to have known who his real mother was… So it got me thinking once again about how secrets work as identification practices — something that considerably presses the folk understanding of privacy as being, well, private.

For example, I recall the first time that I took a small group of students to Thessaloniki, Greece, back in 2008, as part of a study abroad trip. On our way to lunch one day, we were discussing the public nature of secrecy, i.e., a secret that no one knows to be limited to just some people is hardly a secret (it’s just shared information, I guess); for knowledge to count as secrets it needs to be public in a specific sort of way — that is, people need to know that others don’t know, in order to create an identification on the parts of the co-conspirators.

But to press it further, top secret clearance doesn’t really make sense unless some of us know we aren’t cleared. It’s like first class boarding at the airport gate — what good is it if no one sees them go first?

To illustrate the point, I leaned over to Chris and whispered something into his ear (Chris — remember what I said? If you do, then don’t tell anyone…), doing so rather conspicuously (not unlike writing about it now), in front of everyone, for effect, since our newly shared status as privileged knowers set us apart for all to see. (Vaia, who was the local coordinator for our trips back then, caught it on film, making it not just public but digitally eternal.) Now the content was more than mere info — it was a secret, for he and I knew we alone shared it and we also knew who was excluded. And so did they — tightening our mutual identification all the more, for all the players knew where the boundary was and who was on which side of the line.

The moral of the story, I guess, is that privacy is a public phenomenon and that the supposed content of the whisper is not nearly as important as the gesture, the demonstration of status, and public limitation membership. Secrets held too tightly therefore miss the point of what secrets accomplish socially, making open secrets the only sort of secrets that matter.