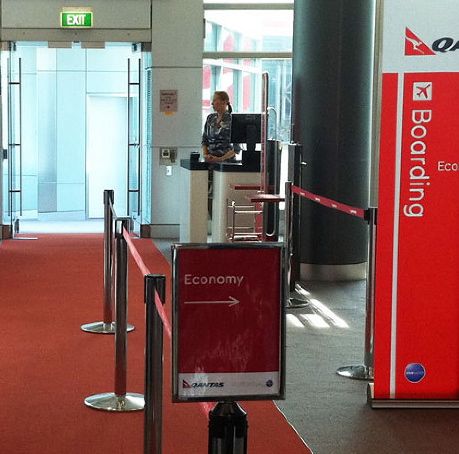 Every time I fly I get a kick out of seeing the lengths to which the airlines go to create the impression among passengers that their (sometimes significantly) higher fees have consequence that matters (other than generating more profit for the airline, of course). Example: no longer do just the first class passengers board early but so do a host of variously privileged, hierarchically-arranged sub-categories that previously never existed, each getting their little perk in exchange for their higher fees, customer loyalty, or using the airline’s own credit card to book the flight: Platinum Club Members step up after those in First Class, then (in a ranking system Plato would be envious of) Gold Card Members and Silver Star Frequent Flyers have their turn. In fact, I await the day when the airlines not only dice up their customers to such an extent that repeat flyers are also awarded with Bronze, Copper, and maybe even Tin and Oxidized Iron identities but when they start mining the vocabulary of precious gemstones for yet more identifiers of dwindling status — maybe Emerald, Amethyst, or Cubic Zirconia club members, perhaps?

Then, sooner or later, the undifferentiated cattle in Zone 5 get to board — not only trudging past the First Class section in single file, as their seated members avert their eyes or drink their champagne (or, more likely on regional flights, sip their pop from plastic cups), but now also walking past the Gold, Silver, and Oxidized people already scattered all throughout Economy, those who have no extra leg room and no champagne but who got on early enough not to worry about getting a spot for the overhead luggage that they didn’t want to pay $25 to check.

Differences that matter? To some, perhaps.

But of all the perks to justify their higher fees, advantages that create the impression of distinction among the passengers, what I find most fascinating is the little ribbon that divides the privileged walkway at the boarding gate from the walkway that everyone else uses. I’ve even seen a nice little carpet on the elite side, on top of the carpet that’s already on the airport’s floor — sometimes a little red carpet, just like the ones that movie stars use, but, yes, way way smaller and with no paparazzi — as opposed to no extra carpet on the proles’ side over in Economy Class.

What is curious about all this is that, once the door to the jet is closed and the fuselage is pressurized, and no matter how much leg room our tickets do or do not entitle us to and no matter where our luggage is stowed, we’re all in the exact same boat — hurtling through the air at the mercy of a sometimes fallible crew, technology that occasionally fails, and the unpredictable elements. Yet despite this dramatic and, to my way of thinking, consequential similarity, the airline industry does its best to create the impression of difference and status– an impression, in large part, of no lasting consequence, much like walking to the left rather than to the right of the plastic ribbon at the gate.

But we all buy it — literally; First Class members gladly go to the left and all the rest of us dutifully avoid stepping on their red carpet, despite all of us walking into the very same aircraft. So the fascinating thing is how it all works in the case of airlines, whereas…, in the case of a candy bar ad campaign, generating an apparent difference between left and right is seen as pointless exercise in arbitrary distinction that’s best parodied in order to sell their product.

So why do we take one exercise in marking inconsequential difference so solemnly while poking fun and winking at the other?