Giddens makes an important point here, one frequently overlooked by scholars who emphasize either agency or structure in their work, and thereby failing to understand the two as heads and tails of the same situated, historical complex.

I think here of scholars intent on studying the meaning of a text, or aiming to determine lived experiences of a particular person, but who seem to overlook that meaning-making is not an individual activity and experiences are not the expression of a lone sentiment; rather, they each require prior conditions to be in place. To pick but one element, there’s no linguistic meaning without non-agential yet enabling (and thus constitutive) rules, like syntax. That is, no one actor made the rules (instead, groups of actors, generations and generations of users, who didn’t even know one another, did), and thus no matter how much agency we think individual actors may have there is a structure that exists apart from them all (like the structure WordPress provides for me as I type this post) that establishes the conditions in which — in this one example — the activity called meaning-making (when reading a blog, for instance) can take place.

And, inasmuch as they work within such a prior setting, people reconfirm it…, and, inevitably, tweak it just a bit — after all, there’s slips of the tongue, slang, and all sorts of unintended linguistic consequences that make meaning-making a dynamic, living thing.

So sure, you can focus your work on agency or just on structure, but, in doing so, you probably need to consider that both terms might just be handy shorthands for an inherently intertwined situation.

Case in point, consider a recent radio story on what social scientists call the stereotype threat.

Give it a listen (or click here if the embedded player fails).

In this case, the actor is both agent and structure — something curiously reminiscent of a Freudian notion of superego or Althusser’s notion of interpellation is at work. For they act but also conform that action by means of self-monitoring (as we are likely often, maybe always, doing in typically reflexive manners).

Thinking back to Giddens, it therefore seems we’d be in error, then, or at least overly simplifying the situation, if we not only failed to see in this an example of how structures are the cumulative results of prior agents (e.g., the researchers who set up the above experiment), who are themselves creatively working within settings established by yet others — and so on, and so on — but also if we overlooked that this thing we call the individual, is simultaneously both the producer of those structures but also their product — demonstrating nicely that agency and structure are forever co-constitutive or, to put it another way, just words we coin to get at different moments of what is actually one coherent process. 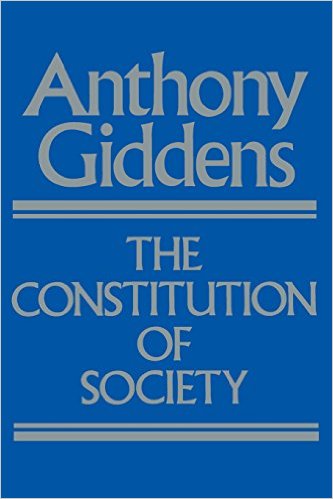