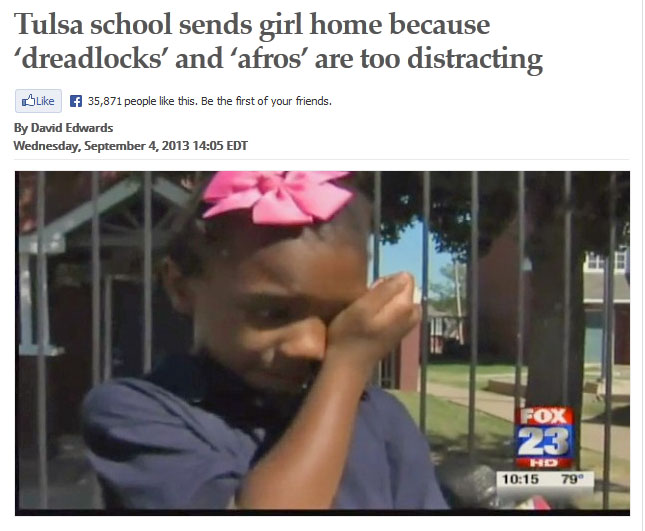 Did you catch this news story now making the rounds? It’s on a charter school in Oklahoma that apparently disagreed with a parent over what counts as a “proper” hairstyle. As reported by the local media:

Officials from Deborah Brown Community School in Tulsa declined speak to the station on camera, but the school policy states that “hairstyles such as dreadlocks, afros, mohawks, and other faddish styles are unacceptable.”

KOKI reported that the “school feels that could distract from the respectful and serious atmosphere it strives for.”

The thing that I find interesting is just how obvious it is, to many readers at least, that the pejorative term “fad” or “faddish” is doing significant work in this text and not, as some might think, simply a mundane description identifying a self-evidency in our world — that self-evidency being the apparent difference between trendy and timeless. That is, the disagreement over what counts as “proper” makes evident that one side’s use of “fad,” not to mention “respectful” and “serious,” is political through and through — a way of representing features in world that helps to normalize but one option in what is pretty obviously a complex situation of possible alternatives.

Yet as easy as it is for many to hear the politics in the school’s claims (a school supported by public funding yet free of a variety of public requirements), it’s rather difficult to find scholars who, when studying social life, approach claims of what counts as “orthodox” or “mainline,” are able to hear these claims as rhetorical conventions working to normalize but one among many options. Instead, these terms, like the term “tradition,” are generally read as transparent descriptors of social facts.

So, using how we listen to this one news story as our guide, it strikes me that, instead of studying traditions in their nuanced descriptive details, scholars ought to be interested in how one contingent, historical alternative among many gets to be portrayed as deserving policing and reproduction, looking to find what forces are in place that create the impression of antiquity and authority where there may actually just be contest and contingency.

Ramey recommends the same. So I can’t be too far off, right?