I was born in 1961, the youngest of four (the oldest of whom was born immediately after the end of Word War II), so that puts me at the tail end of the so-called baby boom. Television predated me, of course, but I was a member of the first generation weaned on it; so there’s a good chance that it was on television, and specifically in cartoons, where people like me came across the things that later turned out to be so much more complicated.

Although all of us would be unwise to trust our memories as the basis for an accurate portrait of things past, if you were to ask me how I first learned about a place called Greece, and what that all signified for me, I’d have to say it was “The Mighty Hercules,” a U.S. cartoon from the early 1960s. It was there that I learned that the signifier “Greece” meant something: columns and men in sandals, without pants; lightning bolts and forces of good and evil; magical things and people with strange names; horses with people for front ends. And all of this was ancient history, of course.

Luckily, television has been superseded by the web, producing youtube, the refuge of those with a nostalgia for such things long past.

I’m not sure whether it was his hands-on-hips and broad-shouldered, can-do stance, his Superman-like black hair (a little long in the back — it was the 1960s, after all), his centaur sidekick, Newton (who, for some puzzling reason, always repeated everything and, even as a child, struck me as a little dense), or his magical ring and that big, matching belt buckle, but whatever it was, it stuck with me. I can still hear not only his shout of “Olympia…” as he would leap (or better, fly, though he didn’t have a cape, which made him all the more intriguing) into action but also that catchy theme song, (sung by the pop singer Johnny Nash) that opened and closed each episode. Looking back on it now, the plots were almost embarrassingly simple (but isn’t that what makes myths so memorable and helps them to do their work?), but it was here, I think, that I first learned that there was a mountain somewhere named Olympus, that there was a bearded fellow who lived up there named Zeus, and that certain heroic individuals could move back and forth between these two worlds.

Of course this is not the sort of tale that helps legitimize my eventually becoming a scholar of religion; so maybe I should reconsider and, instead, invent a better story, one about smuggling a copy of, I don’t know, maybe Jane Harrison’s 1903 classic, Prolegomena to the Study of Greek Religion, into bed with me as a child, and pouring over it with a flashlight under the covers, late at night, turning the clock back a little bit every night so that I could read longer, stealing time from sleep (as Mircea Eliade famously recounted doing as a child, in his autobiography). Yes…, how well I remember flipping through the pages of that old, curious volume….

But that’s not the way it was.

I think that we ought to be more than just a little suspicious of that sort of story of the past, for it helps to justify my present a little too well. It assumes too linear a line connecting a little boy in the early 1960s to the person that I happen to have become today. It misses all the bumps along the road, the accidents and happenstance. Like that bumpy road I drove so many years later, in 2011, with the Edge‘s own Vaia and Merinda Simmons, part ways up that very mountain. 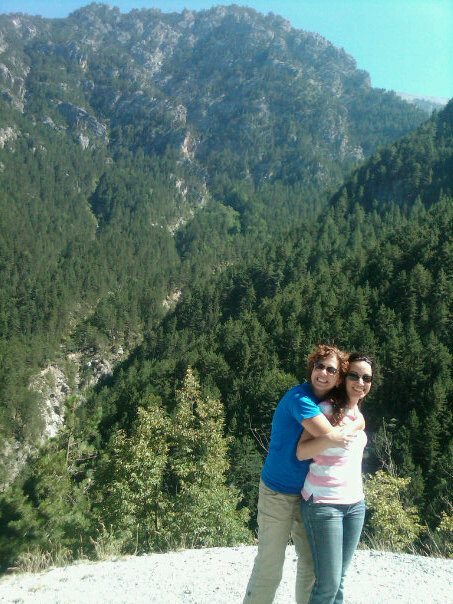 And so I return to my earlier tale and say yes, it was in the cartoons that I first bumped into an idea of Greece — a place far far away from me then, both in space and time. But a place that remains just as elusive even when I’m actually in Greece today, since the place of my memory is with a little boy, in front of a TV, so many years ago.