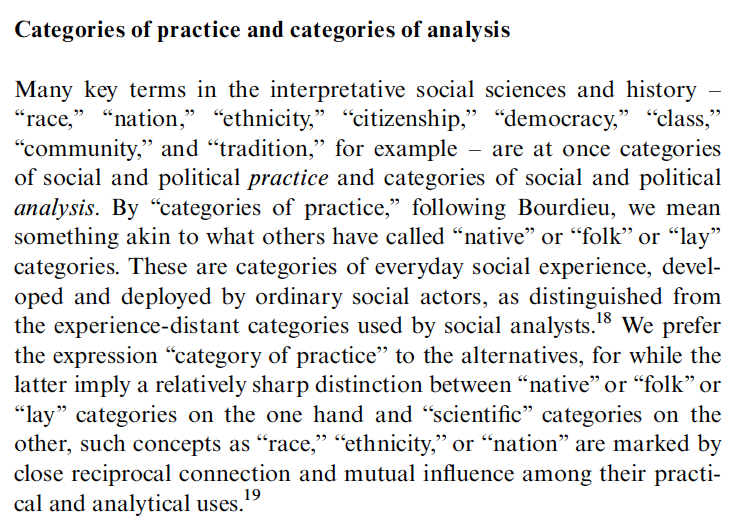 But since scholarship itself is also a form of human, social practice, the question is how have the folk terms — the vocabulary representative of the commonsense of the groups in which scholars themselves are members, for which they have their own affinities, to whose care and reproduction they are undoubtedly and quite understandably devoted — been retooled, redescribed, theorized, and systematized in order to do the work not of local identification but of cross-cultural comparison and analysis.

For without this self-conscious retooling, simply adopting our own folk categories and using them as if they are analytic tools amounts to talking about the world as some group of people are already talking about it for themselves, in service of their own interests, which hardly amounts to a compelling case for the contributions to be made by scholars — unless, of course, that contribution is simply to reconfirm for select groups (those with which scholars are themselves already associated, perhaps) that their (or should we be a little more honest now and just say our?) way of talking about the world was natural and right all along.

That this distinction between practice and analysis is itself a form of identification for that thing we come to call the academy is certain (for we can indeed study the social practice of scholarship itself, no?), but I would argue that the result of these practices, the social formation that we call the academy, is comprised of interests different from those of the people whose lives its members describe. This difference cannot go unnoticed, however, all depending on the degree of affinity the scholar may feel for the lives of the people he or she may study. But we must never forget that defining and studying their culture is our culture, no matter how sympathetic or empathetic one aims to be in carrying out that role; for it is hardly a compliment to the people they may happen to study for scholars to fail to see that their own lives are rather different from living the lives of those others who have no benefit of the critical distance and time for reflection, reconsideration, writing, reading, and discussion that scholars may take for granted.

The above quote comes from Rogers Brubaker and Frederick Cooper, “Beyond ‘Identity’,” Theory and Society 29/1 (2000): 4. Read a PDF of the article here.