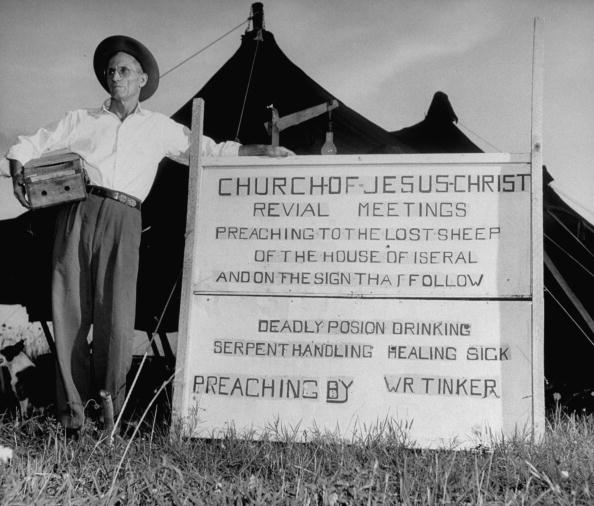 I see that snake-handling Pentecostal churches in the U.S.’s Appalachian region have been in the media again, now that the National Geographic Channel has a reality show on the topic: Snake Salvation.

If you don’t know much about these loosely knit churches in this region, it’s a movement (outlawed in many places) that dates to the very early 20th century when people began to take the following verses pretty seriously:

And these signs shall follow them that believe: In my name shall they cast out devils; they shall speak with new tongues; They shall take up serpents; and if they drink any deadly thing, it shall not hurt them; they shall lay hands on the sick, and they shall recover. (Mark 16:17-18)

What’s long struck me as interesting, though, is that this strikes others as so interesting. That is, if you say you’re approaching the biblical text literally, presuming an infinitely powerful and inerrant being who controls the universe wrote it for you, to help guide your life and actions, then if it says “take up serpents,” well, I guess you take up serpents. Case closed. Whether or not it’s something you or I would do, it’s therefore profoundly sensible to do for a variety of other people.

So why is it so interesting to scholars?

In fact, it seems to me that we’re going about this all wrong. For the way we ought to use this material in classes is to make those who do not pick up snakes as part of their Christian worship ceremony even more interesting than they already are. For all sorts of Christians claim that the text of their Bibles is the word of God and must be read literally, not figuratively or allegorically, yet they certainly do not “drink any deadly thing,” let alone pick up a snake during the Sunday service. So knowing that there are people out there who read this passage so literally means that we have a prompt to study the role interpretation inevitably plays when working with a text, even for self-described literalists. After all, even those who so ardently pick up snakes surely wear clothes made of two fabrics, demonstrating that interpretation, focus, and choice, happens everywhere.

That some people pick up snakes in ritual settings therefore helps us pay to attention to choice rather than simply being fascinated by the serpents in their hands. For its not about the snakes but, instead, about the choices, the interests driving them, the settings in which they take place, and the way we portray all of this as naturally-occurring inevitabilities some of the time.

So we really ought’a figure out a way to look past the sensationalism of the snakes (thus distinguishing ourselves, as scholars, from the TV producers who are no less fascinated by this), to make this activity far more familiar than it might at first seem.