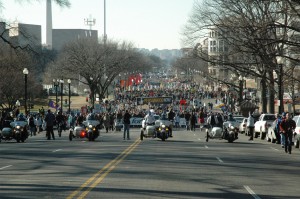 A recent article by historian Randall Balmer making the rounds of social media presents a useful, and for some seductive, counterpoint to the standard narrative of the Culture Wars and abortion. The gist of the article is the unmasking of the ideological interests generating the opposition to abortion, particularly the fear of interference in segregated private religious schools in the aftermath of public school desegregation. Whatever an individual’s feelings about abortion or the role of conservative religious groups in contemporary politics, the article’s title, “The Real Origins of the Religious Right,” alone should give one pause, based on the critiques of rhetoric that we have been presenting at Culture on the Edge. The language of “real origins” suggests the construction of a narrative to promote a particular vision of the world, not simply a description of what happened. The line following the title doubles down on this. “They’ll tell you it was abortion. Sorry, the historical record’s clear: It was segregation.”

The article makes a significant case that the rise of the “religious right” and their support for Republican candidates involves much more than opposition to abortion, but that does not mean the movement’s development can be reduced to a different single issue. As with any narrative (certainly including the narrative that the article questions), the author makes selections concerning what to include and what to leave out to make the narrative cohesive. For example, the author includes comments from W. A. Criswell, one-time pastor of First Baptist Dallas who is often identified as a fundamentalist, that significantly surprised me, as Criswell supported the Supreme Court’s Roe v. Wade decision in the early 1970’s. Balmer also notes that the delegates to the Southern Baptist Convention in 1971, 1974, and 1976 passed resolutions generally supporting Roe v. Wade. What the author seems to obfuscate, within this discussion of the denomination, is the diversity among Southern Baptists and the larger political maneuvering within the denomination in the 1970’s, leading to what has been termed the conservative take-over of the Southern Baptist Convention. In other words, I do not think that Criswell and the Southern Baptist Convention delegates spoke for all Southern Baptists or evangelicals in their responses to Roe v. Wade in the early 1970’s. Perhaps that is a minor chink in the narrative, but it points to the broader issue of selection in the construction of a narrative.

I also do not find convincing his narrower conclusion, “The real roots of the religious right lie not the defense of a fetus but in the defense of racial segregation.” Regulation of private schools, particularly in terms of racial discrimination, appears to be one issue within the mix of motivating factors, at least for leaders of what became the “religious right,” but Balmer also admits, “The electorate, once enamored of Carter’s evangelical probity, had tired of a sour economy, chronic energy shortages and the Soviet Union’s renewed imperial ambitions.” Were the leaders of the movement so singularly focused on private schools in the midst of these various challenges that Jimmy Carter faced that a singular origin is warranted?

Like the origin narrative that Balmer critiques, his account makes its own assumptions and exclusions, belying any simple description of what “really happened”. His account certainly complicates and challenges the common narrative of the Culture Wars, but his conclusion fails to reflect his careful research. While a tidy narrative can be highly seductive when it constructs political opponents (whether of Balmer or of those celebrating/sharing his article) as singularly motivated by racism (hidden behind an opportunistic claim to the moral high ground), we must apply critical analysis to both opponents and compatriots, and such analysis demands a more complicated narrative that acknowledges the multiple motivations and interests of all of us.

2 Replies to “A Seductive Tale of Origins”