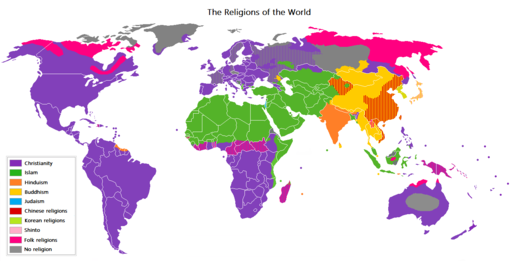 While discussions of “World Religions” often attempt to encourage appreciation of human diversity, these presentations have become the focus of scholarly critiques because of the harm that they cause. Such presentations appear to provide a clear way of describing the world (as illustrated in the map above), but the assumptions behind them often serve to promote European dominance that people present as simple descriptions. A recent animated presentation on Business Insider illustrating the spread of the five major world religions becomes the object of a range of critiques.

The conclusion of the animation makes almost all of the world one of these five religions. When compared to some of the cited sources, similar to the map at the head of this post, areas that others list as “indigenous religions” become either one of the five major religions (as in all of Canada is Christian) or left blank (as in Siberia) within this animation. The selection of five religions reflects other assumptions, as Sikhism (according to cited sources) has more adherents than Judaism but is excluded, not to mention Shinto/Japanese religions, Chinese religions, and the aforementioned indigenous religions. Jonathan Z. Smith in his “Religion, Religions, Religious” essay had a useful insight on the selection of which religions to include.

It is impossible to escape the conclusion that a world religion is simply a religion like ours, and that it is, above all, a tradition that has achieved sufficient power and numbers to enter our history to form it, interact with it, or thwart it.

In other words, what counts as a world religion is more about the people making the list (their interests and perspectives) than a straightforward description of a separate reality.

I want to push these critiques further. What commonality is our basis for recognizing groups as part of a specific world religion / community? Is it self-identification, belief, practice, text, birth, or some combination of these? While the animation starts with Hinduism in the Indus Valley 4500 years ago, what do the people of that valley have in common with people who identify as Hindu today? What about the Israelites and contemporary Judaism or the crucifixion of Jesus and Christianity.

The narrative that the animation follows applies the assumptions, interests, and labels of today back in time to construct the origins of each religion. Following a common understanding of the time of Jesus, at the time of his crucifixion his followers did not have the New Testament or even the Gospels, did not have the sacraments or creeds of today, and did not identify as Christian. Similarly, Abraham and David neither identified as Jews nor followed the same beliefs, practices, texts, etc., as Jews today. Those who composed Vedic hymns in the Indus Valley, commonly seen as the originators of Hinduism, similarly did not identify as Hindu, did not have the same conception of the world, the same texts or practices of today. While we can trace connections from where we sit back to these points of origin, labeling these figures/events as points of origin for each religion has very little to do with the people and events at the point of origin. Rather, they have everything to do with giving a legitimating history of communities today.

Such descriptions of world religions and their origins have serious implications. Besides marginalizing those communities who do not make it into the presentation, the simplified origins narratives reinforces those (often those already in power) who use the narrative of a singular origin to legitimize their own sense of acceptable practice and necessary reform while further marginalizing those who see the development of society and practices as more fluid and complex and resist the more narrow reforms based on a constructed origin. Such constructions, therefore, often have shaped communities (rather than describing them) and furthered physical and ideological conflicts that utilize these narratives and labels to mobilize support.

We cannot fully blame the creator of this animation. He did his homework, at least on one level, and cited a variety of academic sources. Scholars need to incorporate the best in academic research, including the complicated theoretical reflections, into public representations and introductory courses. Too many World Religion courses and textbooks simply retell this type of simple narrative as truth, despite knowing the problems with the narrative. Such presentations encourage its repetition and continue to influence the complicated negotiations and contestations that exist in our world.

5 Replies to “The Harm of World Religions”