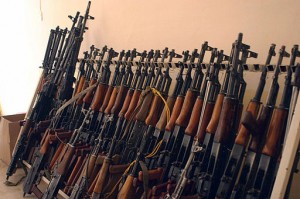 Recently, news sites and social media frequently discussed a February 2014 Public Religion Research Institute survey on LGBT issues (see Huffington Post, CNN). Some commentators have highlighted the assertion that some Millennials who identified as unaffiliated with a religion (sometimes described as Nones) reported that they left religious institutions, at least in part, because of the institutional opposition to LGBT equality. In essence, these commentators constructed these respondents as unified groups (according to arbitrary generations like Millennials and their response to one question as unaffiliated) in order to wield them as a weapon in an ideological battle. What particularly intrigued me, though, was how these constructed groups were objects peripheral, in a sense, to the ideological disputes in which they were being wielded as weapons. The central disputes were among people affiliating with religious institutions; those who identified as unaffiliated were, by being unaffiliated, marginal to the arguments. This example, then, becomes another case where constructed groups reflect the interests of those constructing the group identification rather than something inherent in the constructed group.

Yet, the work of constructing homogenizing group identifications also reinforces other ideological positions that we often overlook because they have become so taken for granted. Whenever we label groups according to national identifications, that act further naturalizes nationalism, the existence of the nation-state, and contemporary national borders that are “imagined communities,” to use Benedict Anderson’s phrase. Choosing whether to refer to the people of Crimea as Ukrainian or Russian today obviously enters a geopolitical conflict. While that is explicit today, identifications such as Pakistani or Indian, as my colleague emphasized recently, also reinforce those boundaries that are historical constructions that are contested. Asking survey respondents to identify their religious affiliation and then grouping people according to those individual responses reinforces the assumption that religion is about individual assent to particular conceptions associated with that label, which is also an historically contingent assumption. We should attend not only to the overt ideological use of group identification but also to the ways that the structure of identification processes naturalize other ideological assumptions so effectively that we often fail to see them as assumptions. Identifications become weapons to support ideological positions that we do not even recognize as positions.