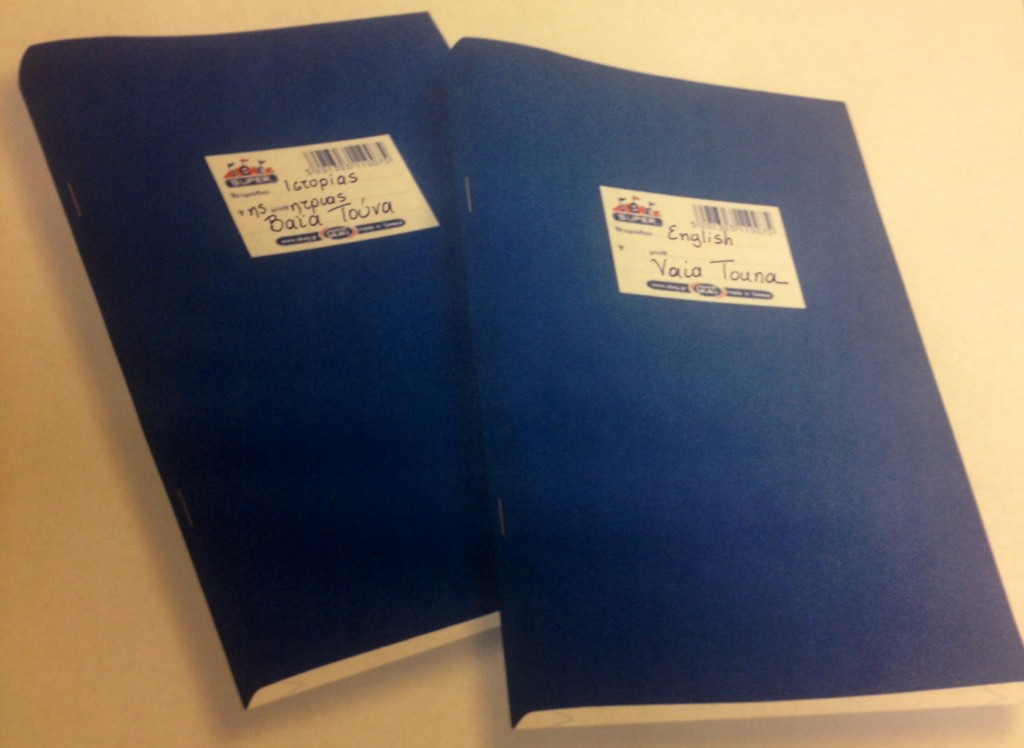 Who we are comes with a name and mine is Vaia, or better said, Vaia Touna. It’s interesting that the name that we come to think that is so much part of who we are was chosen and given to us by others, most likely by our parents. Who we are and how we perceive ourselves is certainly socially constructed, that is, there is nothing inherent in the name we are given, for think about how much teaching and training was involved until we learned to respond to this specific name.

I was baptized Vaia (Βαΐα, pronounced Va-ee-a) but family and friends would call me Vaya (as in Vaya con dios), that is until I got into university when I decided that Vaia sounded more professional, besides that was the name written on my ID, so friends from those years and on, know me as Vaia. I realize that when I introduce myself I stress my first name more, rather than my last; somehow that is how I recognize myself, I am Vaia more than I am Touna. I remember years ago I was at a lecture in Aristotle University, Thessaloniki, Greece, organized by one of my Professors (Ioannis Petrou). After the lecture I was introduced to the speaker (given that I was in the planning committee of that lecture), Christos Yannaras, a very well known Theologian and Greek Orthodox Philosopher in Greece, who upon hearing my first name gave me a lecture on how it is “grammatically incorrect.” That is, my name Vaia means “Palm Sunday’s leaves” which is always plural and therefore the correct name would be its plural form, that is, Vaya and not the singular form, Vaia. Despite that, his comments made sense (even though I thought it was a bit weird), for some reason, though, that my name “Vaia” was a “grammatical error”; that made it even more appealing for me to use!

Years later I came to Edmonton, Canada, to pursue a PhD in Religious Studies. During a summer I visited a very famous heritage festival, held in one of Edmonton’s parks. The festival hosts countries from almost all over the world and they each have a stand where you can be acquainted with the culture of the country. Of course, I visited the Greek stand and before I knew it I was being introduced to the people of the Edmonton’s local Greek community. Curiously enough, as they met me and learned my name, they were correcting it from Vaia to Vaya. That is, until I started saying that I was baptized Vaia; that seemed to be the ultimate convincing strategy on my end, ‘cause who can defy the Church?! In light of that incident, though, my previous encounter with Christos Giannaras made a bit more sense, for that is the sort of policing that is happening and the kind of strategies we use for certain interests and identification processes. Why would it matter to them how I say my name? What was at stake, for me as well of course, to use “Vaya” instead of “Vaia” and vice versa?

But here is another interesting moment in name politics. During that festival I was asked by the people of the Greek community to teach Greek to a class of 7/8 year olds, which of course I was happy to do. One of my student’s name was Athena, immediately for me that was the name of the goddess of wisdom. Now I have to explain for my non-Greek readers that in Greek Athena can be both the name of the city Αθήνα (Athena but the stress goes on the letter “e”) and the name of the goddess Aθηνά (Athena stress goes on the last “a”) so although they are written the same a small change in the stress and they are not only pronounced differently but they mean two different things.

Now, when my student introduced herself to me she said Αθήνα (the name of the city), which I perceived as a mistake given that her knowledge of Greek was very limited and for a couple of weeks I kept correcting and explaining how it is properly pronounced, that is Αθηνά (the name of the goddess). One time after the class was over, I met with her mother and we had a friendly talk about Athena’s progress in class, until her mother referred to Athena as Αθήνα (that is, the name of the city); of course I didn’t miss the opportunity to correct the mother as well, only to hear, to my surprise, that their daughter’s name was actually after the city and not the goddess. I felt really embarrassed, ‘cause I failed to realize that although in Greece it is indeed almost unlikely to name your child after a Greek city’s name but it made perfect sense, being in Canada, for a second or third generation Greek to name their child after a city with such a history and prestige, given also that Athena (Αθήνα) was born around the time of the Greek 2004 Olympic Games and, as the mother told me, that was what inspired them to give the name of the city to their daughter.

This is pretty much the sort of problems that arise when we take our local categories, classifications and understandings to be universal.

But how about my last name, you hardly ever hear your last name, that is, people hardly ever will address you with it, surely you see it printed in official documents and you use it to sign various papers but it does not feel as being “you” as much as your first name, I suppose because family and friends would hardly ever address you with it so you are not familiarized with it (or at least I am not). Recently I found myself at a conference, I was one among six presenters, and during a break I was standing with Monica Miller—who was the host of the conference and also a presenter herself—when we were approached by a student who introduced herself to me, and instantly both me and Monica introduced myself—now given that I am still a grad student (you are not yet a scholar but you are not a student either with the strict sense of the word; it’s like a liminal phase), I felt a certain kind of familiarity with the student and said “Vaia” while Monica said “Touna.” Somehow at this moment, in that context, “Touna” seemed more appropriate while at the same time I thought to myself “Oh, yes I’m Touna,” and at that moment I think I was becoming a scholar.

Given that the conference I was attending was on code switching that little example is indicative of how we are constantly changing codes even if it is just the names we use to identify ourselves, and there are many things at stake in not doing so. In other words, our names are not neutral descriptions and representations of who we are; for, depending on how we introduce ourselves or how we are referred to by others, they may be indicative of interests, agendas and implications, whether we think about it or not, that have social consequences.